While in 2019, the global sales of passenger vehicles tanked, EVs had another banner year recording a 40 percent YoY growth in sales.

The global electric vehicle (EV) fleet expanded significantly over the last decade, underpinned by supportive policies and technology advances. And while in 2019, the global sales of passenger vehicles tanked, electric vehicles (EVs) had another banner year.

In its recently published report “Global EV Outlook 2020”, the International Energy Agency (IEA) details that the sales of EVs topped 2.1 million globally in 2019, surpassing 2018 – already a record year – to boost the stock to 7.2 million electric cars. EVs, which accounted for 2.6 percent of global car sales and about 1 percent of global car stock in 2019, registered a 40 percent year-on-year increase. 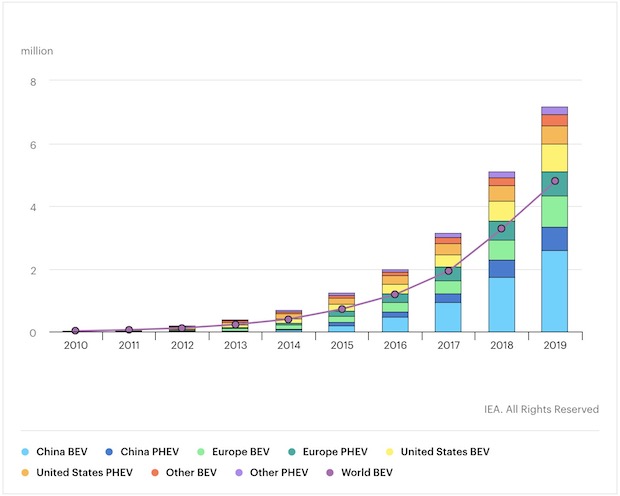 The report highlighted that as technological progress in the electrification of two/three-wheelers, buses, and trucks advances and the market for them grows, electric vehicles are expanding significantly. Ambitious policy announcements have been critical in stimulating the electric-vehicle rollout in major vehicle markets in recent years. In 2019, indications of a continuing shift from direct subsidies to policy approaches that rely more on regulatory and other structural measures – including zero-emission vehicles mandates and fuel economy standards – have set clear, long-term signals to the auto industry and consumers that support the transition in an economically sustainable manner for governments.

Further adding that after entering commercial markets in the first half of the decade, electric car sales have soared. Only about 17,000 electric cars were on the world’s roads in 2010. By 2019, that number had swelled to 7.2 million, 47 percent of which were in The People’s Republic of China. Nine countries had more than 100,000 electric vehicles on the road. At least 20 countries reached market shares above 1 percent.

The 2.1 million electric car sales in 2019 represent a 6 percent growth from the previous year, down from year-on-year sales growth at least above 30 percent since 2016. And the report provides three underlying reasons to explain this trend:

The report also presented its views on how the COVID-19 pandemic will affect the global electric vehicle markets. It added that based on the car sales data from January to April 2020, its current estimate is that the passenger car market will contract by 15 percent over the year relative to 2019, while electric vehicle sales for passenger and commercial light-duty vehicles will remain broadly at 2019 levels. While also stating that a second wave of the pandemic and slower-than-expected economic recovery could lead to different outcomes, as well as to strategies for automakers to cope with regulatory standards.

“Overall, we estimate that electric vehicle sales will account for about 3 percent of global car sales in 2020.,” the report stated.