A new IEEFA report has detailed how a huge global capital pool is mobilising to invest in renewable energy and grid projects in India. 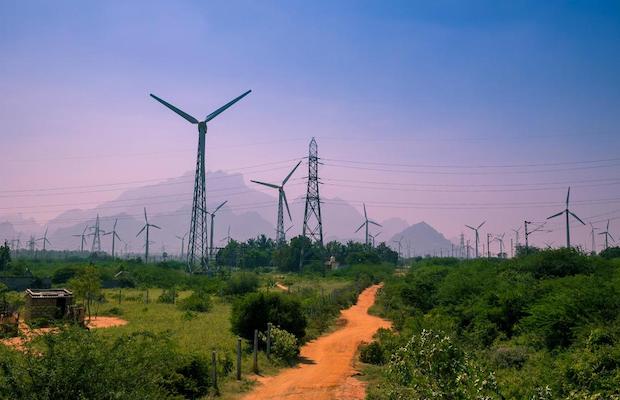 A new report has detailed how a huge global capital pool is mobilising to invest in renewable energy and grid projects in India. According to the Institute for Energy Economics and Financial Analysis (IEEFA), the mass interest comes with pull factors including solar power tariffs hitting record lows, plunging solar module costs, record low-interest rates, and the security of government-backed, 25-year power purchase agreements (PPAs).

The report highlighted that while the renewable energy sector in India has received more than USD 42 billion in investment since 2014, it will require a further USD 500 billion in order to reach 450 gigawatts (GW) of capacity by 2030. This includes the capital cost of adding more than 300 GW of new renewables infrastructure, firming low-cost but intermittent renewable power generation, and expanding and modernising grid transmission and distribution. 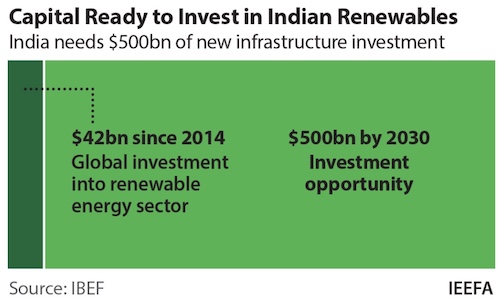 The report follows on from the latest ‘India Energy Outlook 2021’ recently released by the International Energy Agency (IEA) which revealed that India will need USD 1.4 trillion in additional funding for low emissions technologies in order to be on a sustainable path over the next 20 years – 70 percent higher than in a scenario based on current policy.

“India has a once-in-a-generation opportunity to transform its energy system, and the benefits of doing so are huge,” said Buckley, adding that “India could dramatically improve its energy security by reducing reliance on expensive fossil fuel imports. The ongoing solar energy deflation – now around Rs 2/kWh, below the marginal fuel cost of coal-fired power plants – gives India the economic incentive to accelerate its energy transition and be a world leader in helping to solve the climate crisis, plus address chronic air pollution and water stress.”

“We estimate that striving for 450 gigawatts of renewable energy by 2030 would require deploying USD 500 billion of investment over the coming decade – USD 300 billion for wind and solar infrastructure, USD 50 billion on grid firming investments such as gas peakers, hydro and batteries, and USD 150 billion on expanding and modernising transmission and distribution,” said Buckley.

The report identifies the capital flowing into the renewables sector for new projects and infrastructure investment trust (InvIT) structures, as well as the capital recycling opportunities for the National Investment and Infrastructure Fund (NIIF) for operational projects. The sources of capital range from private equity, global pensions funds and sovereign wealth funds, to oil and gas majors, multinational development banks and Indian state-owned enterprises and power billionaires.

Canada Pension Plan Investment Board (CPPIB) and KKR, the world’s largest private equity firm, are now major foreign investors in the Indian RE sector and leading the way, according to the report. In December 2020, CPPIB acquired an 80 percent equity stake in SB Energy India at a valuation of USD 525 million and KKR acquired major stakes in the IndiGrid InvIT in 2019.

The report then goes on to detail how the Indian renewables sector is increasingly dominated by the major independent power producers (IPPs): ReNew Power, Greenko, Adani Green, Tata Power, ACME, SB Energy, Azure Power, Sembcorp Green Infra and Hero Future Energies, and that each has invested strongly in building capacity in international debt and equity markets.

But these renewable energy giants face growing competition from the likes of Vena Energy/Vector Green, O2 Power, Ayana Renewable Power, Torrent Power and Sprng Energy, as well as Government of India fossil fuel majors starting to rise to the decarbonisation challenge such as NTPC and NLC, with Coal India Limited and Indian Railways increasingly looking to pivot aggressively as well.

Co-author Saurabh Trivedi said that as well as attracting capital into new projects, India needs to recycle existing investments in renewable energy projects. “Over the past two years, India’s renewable infrastructure sector has seen significant mergers and acquisitions activities, a growing list of green bond issuances, and spinning-off of operating renewable assets via infrastructure investment trust, or InvIT. This has helped unlock and recycle the existing capital, freeing up project developers’ capital to take on ever-larger tender opportunities.

“But India needs more project developers with even greater balance sheet strength to tap this potential while providing more scope for pension investors. The local infrastructure investment trust market is increasingly being seen as a key facilitator of this domestic-foreign capital interplay, opening up and enhancing the depth of the domestic Indian finance sector,” he concluded.