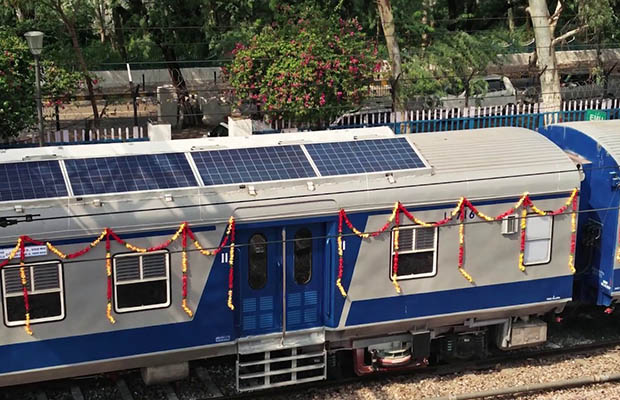 In a landmark move the Eastern Railways recently trialled a Diesel Electric Multiple Unit (DEMU) train with solar panels on its roof between Sahibgunj and Jamalpur in its Malda division from August 10, 2019.

The six-coach DEMU is the first to be run in the eastern sector though a prototype was launched by the erstwhile railway minister, Suresh Prabhu, at the Safdarjung station in 2017.

“This is a unique system. Utilities in the train will be powered by batteries charged by the solar panels even after dark. The life of solar panels is about 25 years on an average. During this period, every such train will help in saving 5.25 lakh litres of diesel. This means a saving of nearly Rs 3 crore per train at the end of 25 years. During this period, nearly 350 tonnes of carbon dioxide emission will be prevented,” ER CPRO Nikhil Kumar Chakraborty said.

According to a source, the train of 1,600 horsepower was built by Integral Coach Factory, Perambur and the solar panels were developed and fitted by the Indian Railways Organisation of Alternative Fuel (IROAF). About 30 such coaches have been developed till now.

Unlike EMU rakes that draw electric power from overhead lines, DEMU ones have diesel-driven generators through which fans and lights in coaches are powered. The smart inverter developed by IROAF allows proper lighting and fan speeds even at top loads after it gets dark. This is through a battery bank that ensures a sufficient flow of power.

“The cost of fitting solar panels on a single coach comes to about Rs 54 lakh. There are 16 plates on the top of each coach. Every panel measuring 1,960mm x 990mm produces nearly 300 watts. Thereby, all 16 produce 4,800 watts. This is converted to 240 volts alternating current to light up the coaches and run the fans,” an engineer said.

Recently, we reported that the Indian Railways Danapur division had signed an agreement with a private company and is likely to install solar energy systems at all its main office buildings and railways stations by the end of August.

In January this year, Indian Railways announced its national-level plan to replace 4,000 MW of coal-fired electricity to run its trains with solar energy from modules deployed on both sides of select electrified tracks in 10 states.