POSOCO Braces for Impact of Eclipse on Solar Power Generation

The Power System Operation Corporation (POSOCO) has in a new report detailed the likely impacts of the annual solar eclipse, that India will be experiencing on June 21 this year, on the country’s power sector/ solar generation and all the preparations that have been made to try and lower the impact on the system. During a solar eclipse, the Sun is partially/fully covered by the Moon, as a result, there will be a reduction in solar irradiance and hence the corresponding reduction in power generation from solar PV cells. 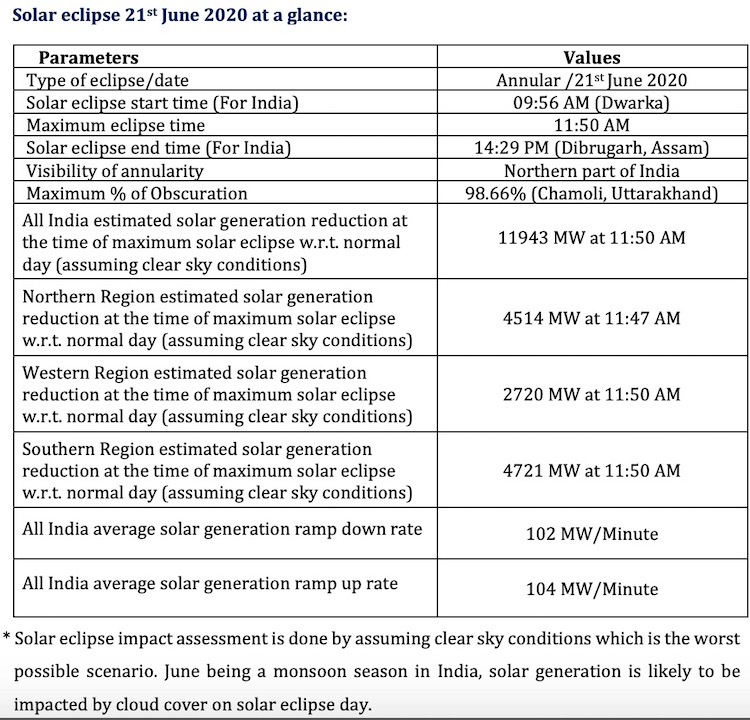 Solar generation, which accounts for 9 percent (34.6 GW as on March 31, 2020) of the total installed generation capacity in the Indian grid, will be adversely impacted by astronomical events such as solar eclipse, due to variation in the solar generation (reduction followed by a rise in generation) and associated large ramp rates. As a consequence of which the grid can take a big hit. Variation of solar generation disturbs load generation balance (LGB) leading to deviation of the grid frequency from the nominal and the same needs to be maintained by flexing fast ramping sources like Hydro and Gas generating stations. Low generation from solar power parks results in high voltages at pooling substations, which needs to be maintained by timely switching of Reactors/ Transmission lines.

Thus, “maintaining load generation balance and system voltages within pre-specified IEGC band in the grid are the important tasks of system operator during a solar eclipse,” the report stated.

As per the report the following steps have been undertaken to mitigate the impact and maintain grid stability:

Irradiance data of previous solar eclipse (26th December 2019) for various solar parks were analysed to understand the impact of the solar eclipse on irradiance w.r.t % of obscuration. This data along with solar installed capacity growth and solar generation data of March 2019/June 2019 and March 2020 is used for assessing the impact. As the onset of monsoon is expected on June 1st, weather at some of the solar park sites in the country may be cloudy on the eclipse day and this will also play an important role in assessing the impact. However, by assessing the impact w.r.t clear sky, system operators are actually preparing for the worst possible scenario. A reassessment of the impact 2 or 3 days prior to eclipse day will also be conducted to provide accurate impact.

2. Electricity demand forecast for the period

From the previous eclipse day demand pattern, it is observed that electricity demand during the eclipse period will be less compared to normal day due to the suspension of some of the activities during this period. After the end of the eclipse, there may be a sudden rise in demand due to the restarting of human activities. 21st June 2020 being a Sunday demand would be 3-4 percent lower on all India basis compared to a working day. Demand for eclipse day is forecasted based on previous eclipse experience and conditions prevailing in the grid during June.

Planning of fast ramping sources like Hydro and Gas for compensating the variations in solar generation.

4. Maintaining the voltages at pooling substations

a. Switching of bus/line reactors at pooling stations and nearby substations

b. Ensuring that STATCOMs, SVCs are in service and put in voltage control mode

5. Coordination across different utilities of the power system

Of the eight major cities in the country, New Delhi will experience the maximum obscuration from the eclipse, followed by Ahmedabad and Mumbai.