NHPC is planning to develop three hydropower plants worth 155 MW and a solar power project worth 50 MW in the Union Territory of Ladakh.

State-owned hydro power giant NHPC has announced that it is planning to develop hydropower plants and a solar project in the Union Territory of Ladakh. And with the view to leverage development of these projects in the Union Territory, AK Singh, CMD, NHPC had recently called on RK Mathur, the Hon’ble Lt. Governor of UT of Ladakh on May 29, 2020, at J&K Bhawan, New Delhi, to discuss NHPC’s proposals and way forward on implementation of various identified hydro and solar power projects in Leh-Ladakh region. 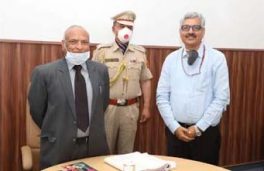 A.K. Singh, CMD, NHPC along with Shri R.K. Mathur, the Hon’ble Lt. Governor of UT of Ladakh during the meeting held to discuss NHPC’s proposals and way forward on implementation of various identified Hydro and Solar Power Projects in Leh-Ladakh region.

The discussion began with Singh intimating the Lt. Governor Mathur about the achievements of NHPC in harnessing hydropower potential of the Ladakh region by commissioning the 45 MW Nimmo Bazgo project in Leh and the 44 MW Chutak hydropower projects in Kargil.

Singh then presented the proposed future plans of NHPC to develop three new hydropower projects in the UT worth a combined 155 MW. The planned hydro projects will be at Khalsi (80 MW), Kanyunche (45 MW) and Takmaching (30 MW) in Ladakh. Besides the hydropower projects, the firm will also be looking at developing a solar power project of capacity 50 MW at Phyang.

While explaining the techno-commercial viability of projects, Singh proposed that taking advantage of high solar irradiance of the region, and the blending of hydropower with solar power may also be explored.

Recently, the firm had announced that its board had approved the proposal to foray into the solar energy business. “It is to inform that board of directors of NHPC Ltd in its meeting held today…has considered and approved the proposal regarding diversification of business of the company by the development of solar power projects as intermediary procurer through solar power developers,” it issued in a statement.

Earlier in March, Union Minister for Power and New & Renewable Energy, RK Singh had said that the Solar Energy Corporation of India (SECI) is planning to set up a 50 MW solar power project in Leh, Ladakh. Answering a question raised in the Rajya Sabha, the minister had said that the government has planned for two solar plants each of 7 MW capacity with 21 MWh Battery Energy Storage System (BESS) at Leh and Kargil. “and a 50 MW Solar Project in Leh to be set up by Solar Energy Corporation of India.”