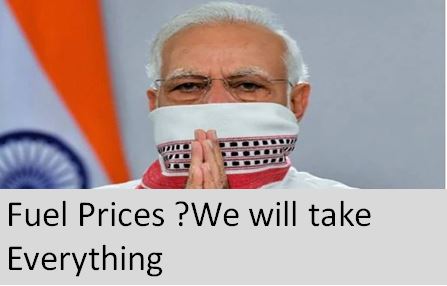 Sticking to a well worn script by now, of not allowing retail fuel prices to go below a loosely defined floor, the government of India yesterday hiked excise duty on the motor fuels by a record Rs 10 per litre on petrol and Rs 13 per litre on diesel. This is expected to help mop up of an additional Rs 1.6 lakh crore revenue. It also means that retail pump prices will barely move, as with these hikes, allied to hikes by various state governments, most of the benefits of the two decade price lows in global oil stay with the state in India.

In case of diesel, special additional excise duty has been hiked by Rs 5 per litre and road cess has been raised by Rs 8 a litre.

With this, the total incidence of excise duty on petrol has risen to Rs 32.98 per litre and that on diesel to Rs 31.83.

For perspective, the tax on petrol was Rs 9.48 per litre when the Narendra Modi-led government took office in 2014 and on diesel at Rs 3.56 a litre. Since then, on oil prices at least, fortune has favoured the NDA government of Mr Modi, allowing it to dismantle most of the administered price mechanism for petroleum products.

In Renewables Shadow, who Will Still Fund Coal in India? : Report
Also Read

Earlier in March this year, that the government has hiked excise duties Rs 3 per litre on both the fuels in hopes of collecting an additional Rs 39,000 crores during the year. Those hopes have been belied so far due to the steep fall in consumption by upto 60 percent caused by the nationwide lockdown.

While it is early to have a number on the revenue contribution of fuel taxes to total government receipts, it is safe to predict that these taxes will account for well over a fourth or 25 percent of  revenues now, as consumption recovers to say, January levels. India usually consumes close to 4.5 million barrels of crude a day, making it the third largest oil consumer globally, and now, possibly with one of the highest tax rates on oil products.

Questions are bound to be raised on just where the funds raised are being spent, as far from minimum government and maximum governance, the country seems to be sliding towards higher government involvement across sectors. Especially on the back of the Covid-19 pandemic.

Globally, the government has not shied away from calling India’s breathtaking tax levels on fossil fuels as green taxes, without quite having anything to show for it in terms of matching investments in green technologies. Investment support for renewable energy expansion for instance, has been minimal, when compared to the over Rs 5 lakh crores fuel taxes deliver every year. India has actually spent far more on supporting fossil fuel based industries, especially coal, as it raced to provide the bare minimum access to power for every family here. With that more or less achieved, one hopes we will see a genuinely  greener approach to coming energy needs.

Retail fuel prices, ironically, are among the only areas where one can expect a consistent price regime, thanks to the unofficial floors this government has set on downsides at least. How far that will to set prices will be tested on the upside, should prices spike in the future, remains to be seen. As current tax levels have increased sensitivity to any price recovery in  crude oil prices globally, unless the government foregoes a share of its cut. Past record indicates that like any addict, getting off an easy revenue source like fuel taxes   is tougher than it seems, for any government.