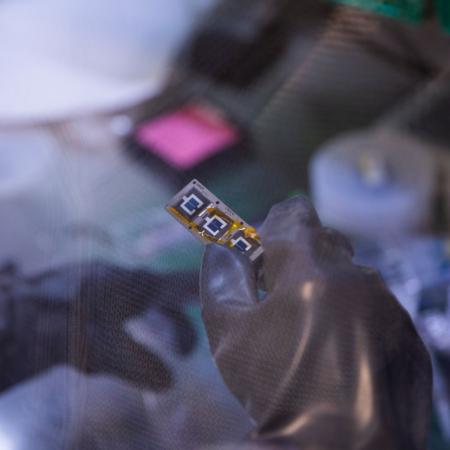 In doing so, the team broke its own record of 23.6 efficiency that it set last year.

“The cost of solar electricity is largely driven by the efficiency of the panels installed,” Holman said. “So, the increase in cell efficiency that we’ve demonstrated has the potential to lower the cost of solar energy, which will, in turn, mean that more solar panels will be installed.”

The results of a paper were recently published in Joule, a Cell Press journal, outline how researchers achieved a new record by adding chemicals to the perovskite precursor solution.

While spinning the precursor solution on top of a silicon cell, the additives increase the grain size of the perovskite, enhancing its photovoltaic characteristics and resulting in a higher open-circuit voltage of the perovskite/silicon tandem solar cell. In other words, it increases the maximum voltage that the solar cell outputs.

“Based on our previous 23.6 percent tandem with a voltage of only 1.65 volts, we saw a huge opportunity for higher voltage to get higher efficiency,” said Yu. “The 1.80 volts open-circuit voltage of the new tandem is the highest demonstrated, making it one of the most efficient perovskite/silicon tandem cells in the world.”

The team envisions its tandem solar cells will be on roofs in approximately 10 years.