Further, the outstanding achievement is that the III-V layers were directly grown on the silicon.

The researchers of the Fraunhofer Institute for Solar Energy Systems ISE (Fraunhofer ISE) have achieved a new efficiency record of 22.3 percent for a multi-junction solar cell made of silicon and III-V semiconductor materials. 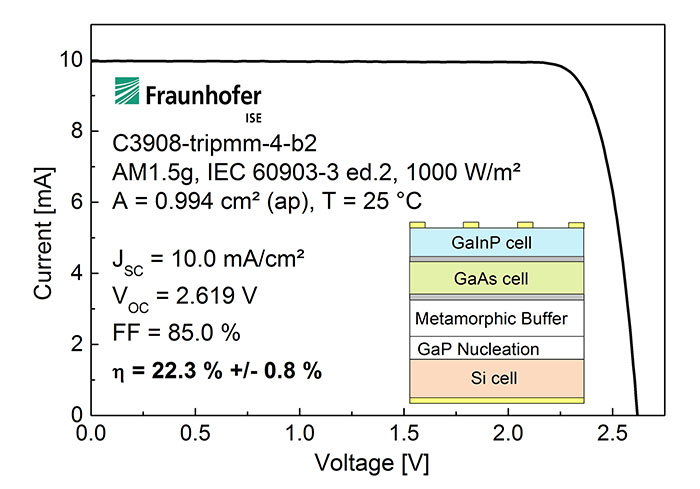 Further, the outstanding achievement is that the III-V layers were directly grown on the silicon.

The researchers have used the approach in which they directly grow the III-V layers on the silicon solar cell. In this approach, the atomic structure must be controlled extremely well during growth so that the gallium and phosphorous atoms arrange on the correct lattice sites at the interface to the silicon material.

Also, the distance between the atoms in the crystal lattice must be increased in order to produce the gallium arsenide material.

Researchers have been working on these challenges for over ten years. Now they have been able to greatly reduce the defect density in the III-V semiconductor layers on the silicon and have successfully produced a III-V/Si tandem solar cell with a new efficiency record of 22.3 percent using this direct-growth approach.

The efficiency value was published in the internationally recognized table of the best research-cell efficiencies worldwide on December 25, 2018.

Commenting on the achievement, Fraunhofer ISE, Director, Dr. Andreas Bett said, “We are delighted with this result for the direct growth of III-V semiconductors on silicon, an important research approach for tandem solar cells.”

“In Freiburg, we are presently building a new research center for high efficiency solar cells. Our work on tandem cells will be carried out in the new facilities upon its completion in 2020. With the improved technical infrastructure, we expect the developments in multi-junction solar cells based on silicon to accelerate rapidly,” he added.