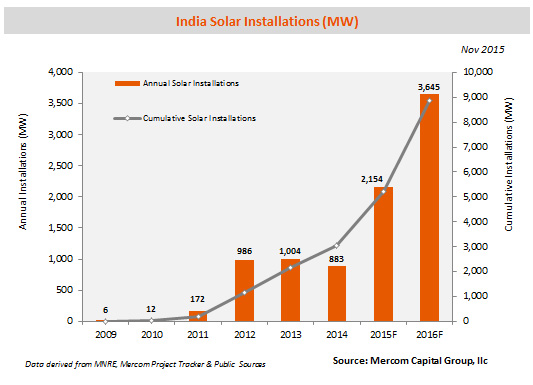 The Indian solar sector is finally emerging from hibernation with solar installations doubling in 2015 after three years of flat growth, said Raj Prabhu, CEO and co-founder of Mercom Capital Group. Global clean energy communications and research firm cited that solar installations totaled 2,133 MW in 2015, up from 883 MW installed in 2014, which is a YoY growth of 142%.

In its latest quarter report on the Indian solar market, the Group reckons that in 2016 the total solar photovoltaic (PV) installations will well surpass 4 GW which will mark approx. 100 percent year-over-year (YoY) growth from the 2015 total of 2,133 MW.

The CEO and Co-Founder of Mercom Capital Group said, Raj Prabhu cited that there are currently just over 10 GW of solar projects under development, with cumulative solar installations in the country totaling 5,632 MW and about 8.4 GW expected to be auctioned off over the next few months though aggressive bidding remains a major concern throughout the solar sector.

“There is cautious optimism in the solar industry as aggressive bidding remains a major concern throughout the sector,” said Prabhu.

The latest auctions have hit new lows at Rs.4.34 (USD 0.064)/kWh, a drop of about six percent in the last three months. Projects with tariffs under Rs.5/kWh (USD 0.0735), unless built at a cost of Rs.5 crores (approx. USD 0.7 million) or below, are considered extremely risky and difficult to finance by lenders and most developers.

But most of these projects are, however, expected to be commissioned in 2017 and developers hope that in the time period between bidding and procurement, module and balance of system (BOS) costs will continue to drop along with interest rates to make these projects feasible. 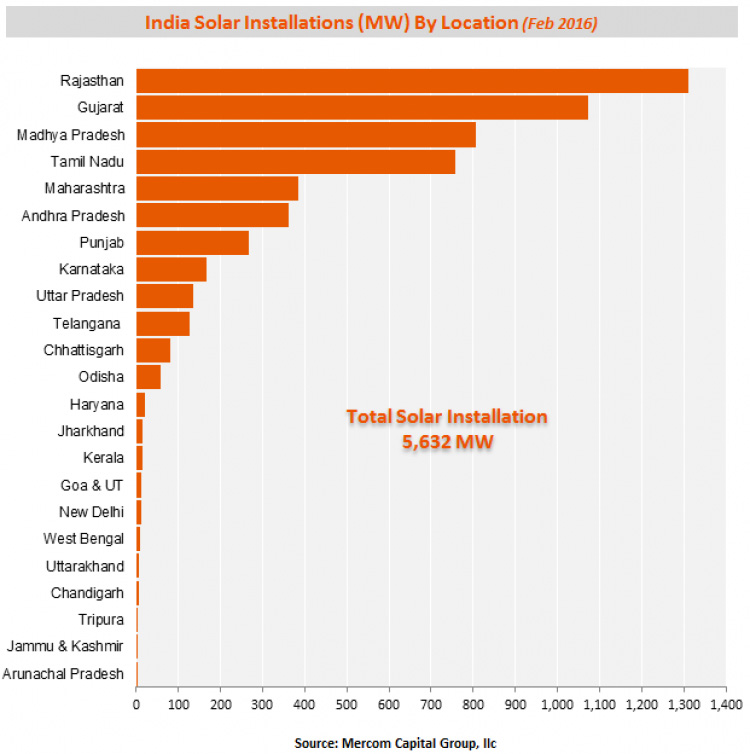 In January, the Union Cabinet approved amendments to the revised tariff policy. One of the most significant revisions is a Renewable Power Obligation (RPO) which would require that eight percent of electricity consumption be procured from solar energy by March 2022. This is an important step towards achieving the 100 GW goal, but the RPO will remain just a number without strict enforcement.

The report further writes that in long run, the effect should be minimal as DCR projects are a small part of the projects auctioned; manufacturers now have clarity and can adjust their strategy accordingly in order to compete. The Indian government is expected to appeal the ruling.

“Restricting the use of cheaper non-domestic components while expecting solar power at the lowest possible price has never made sense,” said Prabhu.

The World Trade Organization (WTO) recently ruled against India’s domestic content policy for solar cells and modules which was originally filed in 2013. In the short term, this will affect manufacturers who are overly dependent on the Domestic Content Requirement (DCR) market added the report.