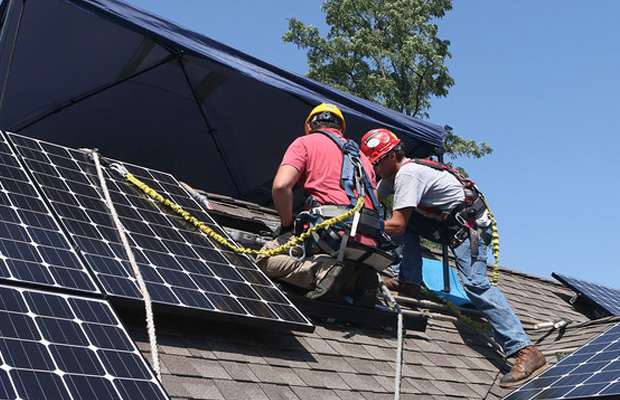 Everybody wants to get maximum benefit out of their purchase. And the want applies only too well for solar panels.

Producing electricity using unconventional sources like sun, wind, geothermal or biogas hasn’t been an easy task. Apart from innovating on surface materials that converts these kinds of sources into electric current, there’s a host of circuitry backing it that “cleans” and “improves” the output, allowing it to be used like normal electricity.

Unconventional sources are irregular in nature and can create generation issues that drag down the performance of the whole system; or sometimes render the output useless. A peculiar problem of this kind bugs the solar panel systems when sunlight is shaded due to a number of reasons – clouds, birds and animals, dirt, vegetation cover or various others. This affects the output derived from non-shaded regions as well, reducing the total output drastically.

But fortunately, advancements in electronics have been dealing with this matter more and more cost effectively. From converting DC electricity to AC on individual panel, to getting just the MPPT done, solar generation is getting smarter at dodging the shade.

What happens when a panel is shaded?

Depending upon various factors, a PV panel generates anywhere between 4V-20V or even more. So, on an average, 12V panels are connected in series to get more voltage from the system.

In series, voltage is additive and current remains the same. Ten 12V, 3A panels can generate 120V at 3A. But if one panel goes out of order, the whole system will stop generating electricity.

In parallel, the voltage remains the same but current is additive. The same arrangement would produce 30A at 12V. Due to the power being produced at lower voltage, this arrangement is not preferable.

But electricity generated from the panel is highly irregular. In shaded conditions, the resistance of panel increases, lowering the output of the overall system. This is also termed as shifting of the Maximum Power Point to a lower value.

This generally applied to a series arrangement, which is not the best way to get maximum power out a PV system. A slight change in output of one cell can bring down the power of the whole system. Or, even 10% of area experiencing shade can bring down the total output of the system to half!

Moreover, it is difficult to add modules to your system later if you wish to increase its capacity. A new module introduced in the system must have same current rating as the others in the string (they obviously would all be having the same rating) for the system to work efficiently. Remember, it’s always the current and voltage ratings that matter while you are increasing the capacity, not the wattage.

What is the solution of this problem?

Power generated by PV panels is very similar to one released by a battery. It can be sent to grid, used to charge a battery or split for both, but only after it is fed to a charge controller.

In the first case (whole power applied to battery), instead of collecting the power at one end and feeding the inverters, small micro inverters are placed on individual panels.

During shaded conditions, the output of a panel changes. To sense this change, a Maximum Power Point Tracking (MPPT) system changes the load connected to the PV system, optimizing the net output and increasing it by upto 20%.

If, with the micro-inverter circuitry, MPPT is applied to all panels. Power from each panel can be optimized individually before serving the connected load.  But with the micro inverters deployed for every panel this will result in too much circuitry to be deployed in large scale setup, increasing the cost and complexity of the system. If only the MPPT could be separately applied, micro inverters won’t be needed for each panel.

Power optimizers have become increasingly popular with the solar and wind electricity generation systems. They maximize the power output of a system without much increase in its initial cost.

Power optimizers are DC to DC converters. They are similar to micro inverters as they isolate the panels, eliminating the effect of any individual panel’s efficiency on the whole system. Marketed as smart modules, they are a solar panel embedded with a power optimizer at its back (or in the junction box).

Only MPP tracking systems are mounted on the solar panels to track and optimize their output in DC. All the panels are connected in parallel to minimize any effect of shade; alternatively a number of series-connected strings put in a parallel combination, if the number of panels is more than a certain count. The output is collectively sent to a central DC-to-AC converter.

To bring down the cost, this hybrid system is an alternative that keeps the micro inverter out of picture.

Optimizing generation in shaded conditions by 25%, this method brings down the per-watt generation cost of the system by 20% compared to that claimed by micro-inverter technology.