Solar industry in India seems sound. The most undeniable facet of renewable especially solar is that it floats between both the operational and technology world. Simulation, monitoring, theft-control, system design are critical while yielding a successful solar story. Most importantly, project management solutions are evident for a solar project. Solar is also in the preface of rationalizing an epic phrase, “Without software, hardware is just another obsolete object”. Hence, what is clear to win the long-term solar play-off, software will cement a strong path. To add, India has the IT as a part of its strong GDP; software can be added as an ingredient to season the amazing flavor of solar to the world. 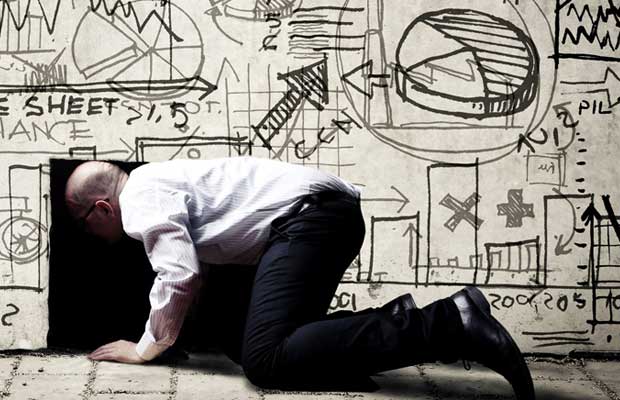 How Information will become a Technology for Solar in India?

Consolidation can only woo the Indian solar Industry in long-run. Few countries who named as renewable leaders have well apprehended and formed a consolidated synergy to drive this sector as a commodity. Soft costs like permitting, financing and customer acquisition, now represent roughly two-thirds of installed costs of deployments. Not just merely said of remote-monitoring and using tools to keep the output generation on radar. Mature solar countries use software to even find their potential customers. This is mandate to usher the Indian solar industry when the tenure of projects will be privately-taken and not with public bids.

With a strong foundation of startups and DevOps working towards new apps, the solar industry will find a lucrative and cost-effective way to deal with their ancillary problems and even make a buzz across the potential sectors. To clear the mythical $1 billion valuation hurdle, today’s DG software players will need to expand their addressable market. The good news is that the overall solar industry is growing at a rapid clip, so the underlying trends are favorable. Getting a firm grasp on total potential market size is much more of an art than a science, but we can take the International Renewable Energy Agency’s (IRENA) global renewable energy employment forecasts as a basis for estimation. 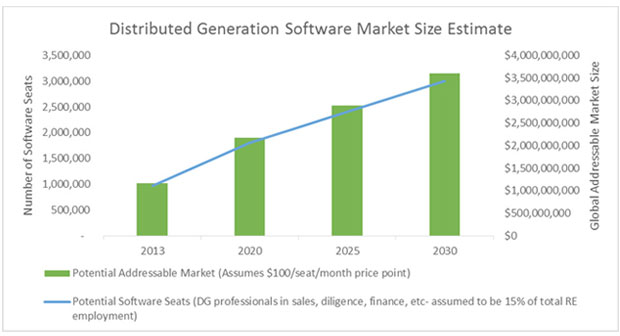 Analytics, big data, cloud computing might not be commonly used term in today’s Indian solar industry market But, the profound growth of Internet will immensely bring a new in-market growth for solar. Taking the Indian scenario, India is undergoing a huge “Electricity revolution” (as I name it). The transition from traditional grids to future grids will bring a new era of challenges. Days are gone when we can think of power flows as one-way, from generation to transmission to distribution to consumers. Solar has unveiled a whole new ball game. Consumers who set up their own solar panels can now become producers and they can also voluntarily adapt their loads— if given a signal or incentive. What about the basics of software revolution has started when we now pay our electricity bills through an app. That is no future when we even monitor and keep track of our electricity generation and evaluate the usage at the same time. Theft (loss) reduction is a much-touted use for smart grids, where smart meters can help pinpoint leakages. But these can do much more—in addition to smarter demand control, one can even make supply much smarter. If one has a shortfall of power, we usually face feeder-level load-shedding. Solar industry could end up being data that ultimately pushes down the cost of solar enough so that it can compete with fossil fuel energy.

There are young minds that are working and have demonstrated how machine learning and artificial intelligence technique that involves feeding data to algorithms, machine learning-powered algorithms get better at figuring patterns in the data which can be helpful for selling solar panels. Selling solar panels to consumers has emerged as a tricky and expensive problem for companies. That means in those places, increasingly, solar companies will have to convince more mainstream customers, who are generally more price-sensitive, to buy solar panels. Other startups are using data to make it easier to finance the cost of installing solar.

Investment – The Next Built for Indian Solar Industry

The rise of data tools—algorithms, machine learning, sensors are deluging investments. Acquisitions of new technologies and solar startups are on a spree to unfold new companies that are using data to solve various solar industry problems. On this text, big companies are prime in a keeping a spate budget for software solution to lower the cost of generating energy from the sun mainly on tracking, monitoring and evaluating data from solar projects. The investment question on software is still meagre but it is expected to be a million-dollar space to look into. Acquisitions and IPOs in the top 10 market share for solar continue to pin the importance of IP, hardware and software for end adoption of solar at volume. IT systems are continually the key to unlocking scalability and project velocity among industry leaders. IT systems are also helping installers differentiate by using platforms and tools to enable the customer experience.

Solarrus Corporation, a provider of commercial and utility-scale design, operations and maintenance, and electric vehicle and battery storage services, announced it has acquired Power Factors. The acquisition adds to Solarrus an industry-leading software platform for monitoring and

Electronics giant Flex, through its solar gear subsidiary NEXTracker, revealed that it had bought a machine learning startup called BrightBox Technologies. The three-year-old company, based in Berkeley, Calif., developed software to optimize heating and cooling systems in buildings.

Mobisol announced its acquisition of Lumeter, a San Francisco-based pay-as-you-go (PAYG) Software Company. In the announcement, Stefan Zelazny, Chief Innovation Officer at Mobisol stated, “[Mobisol and Lumeter] are able to provide a hardware agnostic software suite that makes major consumer and commercial implementations possible. We see the Lumeter acquisition as a key step in our plan to expand the pay-as-you-go market for Mobisol, its off-grid partners and other technologies beyond solar.” Lumeter’s software platform provides PAYG capabilities beyond solar and includes minigrids, solar pumps, and other agricultural technologies like rice mills. This expansion offers an opportunity to Mobisol to expand into other services. 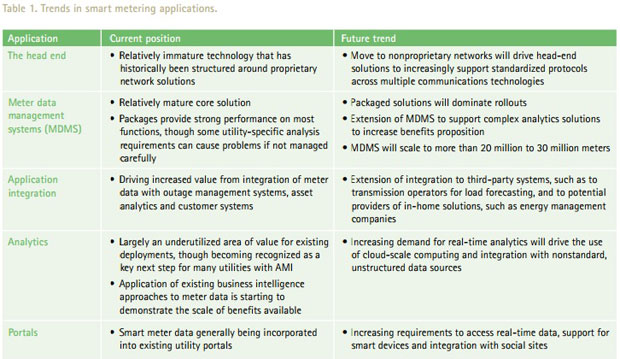 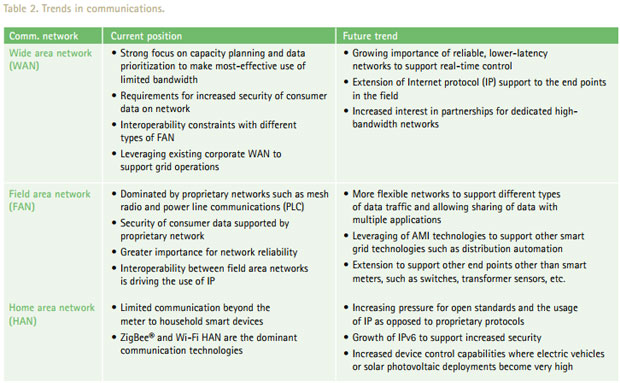 Energy storage provider and system integrator Younicos has been bought out by Aggreko, a power generation equipment and energy controls supplier. Younicos, widely considered one of the ‘pioneers’ of advanced battery energy storage, with head offices in Germany and in the US, has executed some 40 projects to date across four continents, totalling more than 200MW of flexible resources deployed. This includes Europe’s “first commercial battery park” for utility WEMAG in Germany and a forthcoming 49MW project for Centrica in Cumbria.

The company delivers turnkey systems as well as software and system integration solutions. It recently also launched Y.Cube, its own branded energy storage hardware for the commercial and industrial (C&I) markets.

Piyush Goyal Rush For ‘Smart Meters’ is Holistic for ‘Software’ 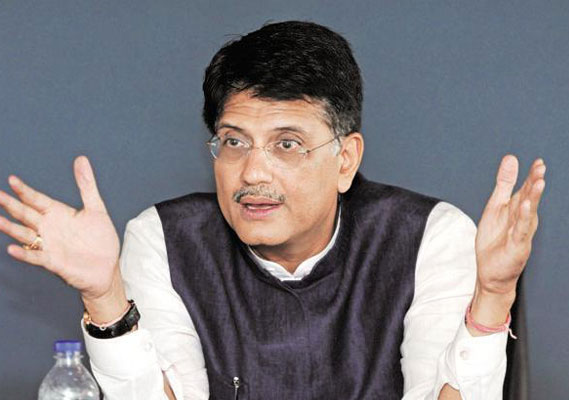 The renewable and power infrastructure resurrection of India has strong dialogue from our Union power minister Piyush Goyal. With Haryana aims to be the first state in India to expedite the process of installation of smart meters, the discussion of strengthening and modernisation of the power sector is on the deck. The Union Minister also pitches wider use of smart electricity meters and asked electrical equipment industry to come up with innovations that suit the domestic consumer for an energy efficient society.

Goyal has emphasized that “Smart meter can be a game changer when it comes to planning the electricity sector in the long run.”

Taking the software perspective, anything which carries the word ‘Smart’ has an electronic and software gameplay. Regardless of its mass deployment with a critical grid infrastructure in this country, Smart Meters are a game-changer. The supply chain and capacity management require frequent monitoring to verify sufficient access to materials and installers. Smart metering deployment is far more than an asset replacement and IT program and the change approach must reflect this. Operating the change management program in a manner that emphasizes the new capability requirements and ways of working would support benefit realization. Analytics as a key capability in smart metering value realization The step change in availability of accurate load and power quality data from millions of end points offers enormous potential value in managing the network, generation and consumer relationships. Accenture’s executive survey results support this view, with analytics solutions representing the highest-priority smart grid solution. However, delivering these solutions will require an advanced analytics capability that enables integration and examination of large quantities of data.

Where India is still a market based on installation and finding new scopes, mature renewable countries are disrupting the renewable space. Few examples are inscribed to support my words.

Kyocera Corporation announced that it has been registered with the Sustainable open Innovation Initiative (SII) as a resource aggregator for a new program to help control energy resources among Japanese consumers. The company aims to focus on remote management of energy supply and demand using home battery storage technologies in a new phase of virtual power plant (VPP) testing. The project is part of a program implemented by Japan’s Ministry of Economy, Trade and Industry (METI) to test a VPP utilising consumer energy resources.

Illinois’ Future Energy Jobs Act, which is expected to grow the state’s solar capacity to over 3,000 MW by 2030 – enough to power approximately half-a-million homes.

A large part of NextGrid involves advanced technologies like the smart inverter, a disruptive technology with the potential to improve grid reliability, create economic value for customers, and lower pollution.

Smart inverters embed robust software and are capable of rapid, bidirectional communications. Historically, inverters operating behind distributed resources would immediately shut off during any disturbance to the electric grid. For example, when there is a sudden increase in electricity demand, the grid may have fluctuations in frequency. Previously, solar inverters would immediately shut down once the grid’s frequency or voltage went outside of normal operating levels.

Smart inverters, on the other hand, can support utilities’ efforts to stabilize the grid during disruptive events. Through seamless communication between grid operators and the inverter, utilities can remotely control these technologies to help with issues such as voltage and frequency fluctuations – if policy and regulations allow utilities to do so. 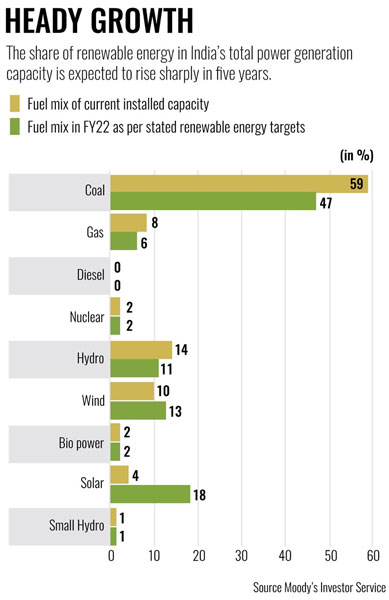 India is today the third largest consumer of electricity. Over 450 million ceiling fans are in use and 40 million sold each year, but 240 million people still have no legal electricity connection. India’s greenhouse gas emissions are predicted to keep increasing at least until 2030 – something it is working hard to change with serious energy efficiency measures.

Based on the current capacity addition targets, the ratings agency forecasts India will meet 19% of its power demand from renewable energy sources in five years, by fiscal year 2022 (FY22). Fuel-wise, the share of solar in total installed generation capacity is projected to rise from 4% now to 18% by FY22. While coal-based energy is expected to play a diminished role, the share of wind energy is estimated to rise 13%.

This time around, the difference between success and failure will lie in companies’ ability to make step-function improvements in operational efficiency, rather than incremental improvements and optimization of current processes. With a digitalization strategy that orchestrates people, processes, and platforms simultaneously to achieve operational speed and efficiency, companies are poised to become more agile in their ability to confront and take advantage of continuous change.