Millions of people across the world bought bicycles during the pandemic. For some, they were merely a means of going from point A to B without having to deal with the big crowds often present inside bus or train stations. For others, they were a form of recreation. 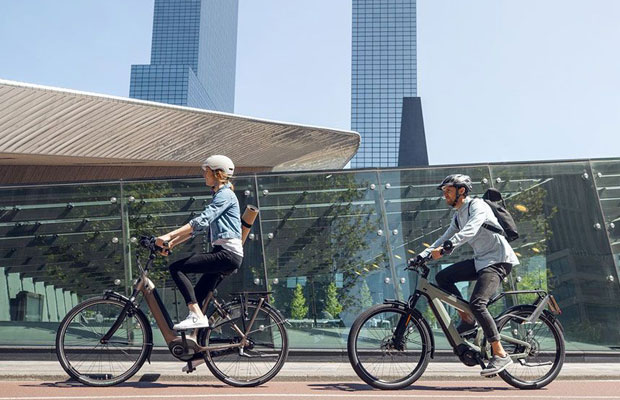 While bikes have served us well over the years, how and why did E-bikes come into the picture?

Electric bikes are easy to use and allow people to commute without much physical strain (no more arriving at work drenched in sweat). Not only can they get you to your destination quicker, but they also make it easier to cross through rough terrains which are otherwise difficult to pedal through. E-bikes also make a lot of sense from a logistical standpoint, as they allow workers to haul heavier goods over larger distances. Plus, being an eco-friendly alternative to fossil-fuel-powered two-wheelers, they can potentially be a solution that counters growing pollution issues. For these very reasons and more, e-bikes have gained considerable popularity in India and are touted as the ideal mode of transportation for its large, future-ready generation. The pandemic has further boosted e-bike sales by 145% from 2019 to 2021, which is double of classic bikes, according to the market research firm NPD Group.

A report by Fortune Business Insights titled ‘Electric Bike Market’, 2021-2028 explained that the global electric bike market size is expected to reach USD 52.36 billion by 2028, exhibiting a CAGR of 16.0% during the forecast period. The evolving technological innovations, coupled with growing awareness about the efficiency, eco-friendliness, and convenience of electric vehicles, have an excellent impact on the electric bikes market growth.

E-bikes have a long history and have been around for much longer than one would have guessed. Patents for the earliest models were issued 120 years ago. So, what’s made them so popular now? The answer lies in new technologies that make them faster, safer, and long-lasting.

Batteries: The earliest lead-acid batteries were extremely heavy. Over the years, technologists and engineers have experimented with new battery materials that can store more energy in smaller areas. Research in the 1990s on nickel-metal hydride batteries offered a range of about 60 miles. Today, most bikes rely on high-density lithium-ion cells that can store more energy in a more compact footprint and have ranges that exceed 100 miles. The energy density of leading Li-ion batteries has doubled in recent years, while the cost per unit of energy has fallen by more than 70%, according to “Electric Vehicles and the Magic 8 Ball,” which appeared in the March 2017 issue of IEEE Electrification Magazine.

Electric motors: Like batteries, electric motors have been around for a long time. The earliest electric motors relied on brushes, which provided electrical contact in the fast-spinning commutator. Because these fixed parts were in contact with moving parts, they wore out and required maintenance. Brushless electric motors, introduced in the 1960s, have consistently evolved to produce more power with smaller and smaller designs. Today’s electric motors for e-bikes rely on a brushless design and powerful, rare-earth magnets to create drive systems that require very little maintenance.

Torque sensors: The vast majority of e-bikes sold around the world are known as pedal-assist bicycles or “pedelec” bikes. The defining feature of these bikes is that the rider has to pedal for the motor to engage, and the motor assists the biker, but doesn’t do all the work. That’s a big benefit to urban commuters, and it also helps people travel longer distances without getting fatigued.

It would be dangerous for an e-bike motor to apply full power at the slightest hint that the pedal was moving. Pedal-assist e-bikes need a sensor to detect when a pedal is moving. Older e-bike models have simple cadence sensors that interpret rapid pedaling as a demand for more power, but that isn’t great going uphill, where a rider might be forced to pedal slowly while needing a bigger assist. The solution: torque sensors that detect the amount of force applied to pedaling. Chief among these technologies are magnetoelastic torque sensors. In this design, the bicycle’s crankshaft is magnetized in a specific direction, surrounded by a sensor that measures the torque applied to it through pedaling.

The industry has significant momentum. Luxury carmaker Mercedes and motorcycle brand Harley Davidson have both developed e-bikes. What remains to be seen is whether people will use them to replace their automobiles or reserve them for recreational use.

In major cities, a boom in e-bikes has led to a push for more bike lanes. But there’s also a push to make e-bikes safer with technology, like sensors that can predict the trajectory of a car, and warn either the rider or the driver of an impending collision with sound.

The increased adoption of e-bikes “requires redesigning cities to be more bike-friendly,” said IEEE Senior member Simay Akar. “Data analytics technologies can aid smart and green cities planners’ efforts. Policy measures and structural socioeconomic modifications are some of the most important potential key elements of this transition and offer the potential to maximize the benefits from the transition.”