In a press conference, minister Jain said, “Delhi government has floated nation’s biggest tender for EV (electric vehicle) charging today, with provision for 500 charging points at 100 locations in Delhi so that EVs can be charged outside homes too.”

Also, he estimated the expected timeline to complete the project, as he announced that the completion of this EV charging project might take a year.

He took the announcement to Twitter as well, he tweeted, 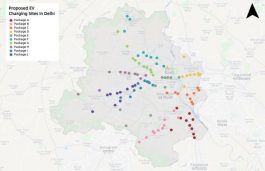 “With a vision of Shri @ArvindKejriwal Ji to make Delhi the EV capital of the country, have floated a tender today to set up 500 EV charging points at 100 locations, which will have at least 10% minimum fast charging points and the rates of which will be kept very nominal.”

In his tweet, he posted a picture showing the scheduled packages depicting all the locations, where EV charging points are to be installed.

One day before, on Thursday, Delhi CM Arvind Kejriwal launched a ‘Switch Delhi’ Campaign in which the government is giving subsidies on EV purchasing. Not only this but, the government has exempted the road tax and registration fees for EVs in the state.

Additionally, CM appealed to people to buy such vehicles to combat pollution in the city and said, his government will hire only electric vehicles for various purposes in the next six weeks.

In his press conference on Thursday, Kejriwal said “In ‘Switch Delhi’ campaign, awareness will be created about benefits of electric vehicles and how it can contribute to making Delhi clean and pollution free. I appeal to people to take part in the campaign to promote the replacement of polluting petrol and diesel vehicles with electric vehicles and make a contribution towards a pollution-free Delhi.”

The state is running fast on the road towards EV adoption as earlier this January, the Transport Department of Delhi had issued three request for qualification and proposals (RFQP) for the operation of 575 electric buses (E-buses) in the capital.