A view that we have repeatedly pointed out as an unfolding reality has been confirmed by CRISIL too. The leading research firm  has predicted that by 2024, as much as 43-48 percent of new 3-wheelers (excluding e-rickshaws), and 12-17 percent of new two-wheelers sold in India will be electric vehicles (EVs), a study by CRISIL Research has shown. But traction may be low for 4-wheelers, with only 5 percent of new sales likely to be EVs.

The study looked at demand, supply and policy growth drivers for EVs such as battery costs, government subsidy and charging infrastructure, besides conducting a segment-wise analysis of the cost of acquisition and operation of EVs compared with existing internal combustion engine (ICE) vehicles. 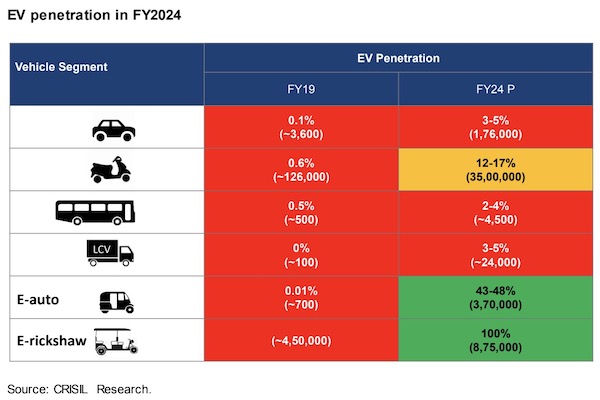 Hetal Gandhi, Director, CRISIL Research, said that “in the context, supply will also be a critical factor for adoption. The top five electric two-wheeler manufacturers are expected to increase their capacity for electric variants from 0.4 million units in fiscal 2020 to over 3 million units by fiscal 2024. And in three-wheelers, even incumbent original equipment manufacturers are launching e-autos at a rapid pace. But low-speed, four-seater e-rickshaws are fast emerging as an alternative to e-autos because of being ~30 percent cheaper.”

At the other end, sales of personal electric cars will remain in the slow lane due to high acquisition and ownership costs, in the absence of demand incentives. Cab aggregators, though, will step on the accelerator as these will enjoy better operational economies and subsidies. A cab aggregator e-car that runs ~50,000 km a year, for instance, can save about Rs 1.65 lakh a year compared with Rs 35,000 for a personal e-car that runs ~10,000 km a year. And in the commercial vehicle space, subsidies to state transport undertakings will drive sales of electric buses for intra-city operations. 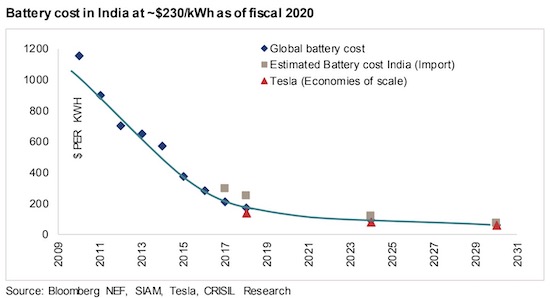 Pushan Sharma, Associate Director, CRISIL Research, said “the government has created a policy push for EVs with the second installment of the Faster Adoption and Manufacturing of Electric Vehicles in India or FAME II policy and numerous efficiency and emission regulations. However, India has much caught up to do in terms of the four drivers of growth globally – battery price, demand incentives, supply push, and charging infrastructure. That means policy implementation will be crucial to the faster adoption of EVs in India.”

The researchers expect the landed cost of a lithium-ion battery – a key driver of EV adoption in India – to come down in line with an expected drop in global prices by fiscal 2024. Execution of the government’s phased manufacturing programme for EV batteries, too, will help drive down battery prices. Till then, EV adoption will be gradual, giving auto component manufacturers enough time to realign their operations.

The report then goes on to gauge the impact of high demand subsidies and tax incentives on the driven EV penetration, comparing the output in countries such as China and Norway, to that of India.

In Norway, for instance, a whopping 46 percent of new vehicle sales came from battery EVs (BEVs) and plug-in hybrid EVs (PHEV) in 2018 (see chart) as the country offers substantial tax and other concessions to EVs. Although subsidies have now come down in China, it was this initial thrust that has turned it into the largest EV market with a stock of 2.3 million BEVs and PHEVs as of 2018. In comparison, subsidies for EVs in India are much lower, which has affected the COA, and constrained sales.