CRISIL Report on Getting Charged 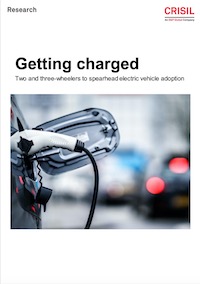 By 2024, as much as 43-48 percent of new 3-wheelers (excluding e-rickshaws), and 12-17 percent of new two-wheelers sold in India will be electric vehicles (EVs), a study by CRISIL Research has shown. But traction may be low for 4-wheelers, with only 5 percent of new sales likely to be EVs. The study looked at demand, supply and policy growth drivers for EVs such as battery costs, government subsidy and charging infrastructure, besides conducting a segment-wise analysis of the cost of acquisition and operation of EVs compared with existing internal combustion engine (ICE) vehicles.