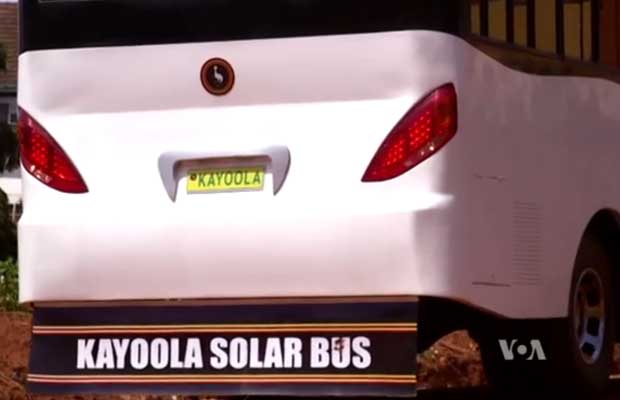 The bus has 35 seats and is the first public bus in Africa to be powered by the Sun. According to the chief engineer of the project, Mairo Obuwa, engines of these buses are completely silent.

Speaking to VOA Obuwa said “This bus, there’s actually no engine. What is driving the bus is a motor, a traction motor, which is being run by a battery and the battery banks are the ones that are linked to the solar system that’s on the roof. So we have the battery that is driving the motor and that gives us a full range of 80 kilometers on full charge. And then the solar panels come to supplement the extra mileage so it adds an extra kilometer to the total.”

The bus can be recharged using solar power or connecting to electric power source.  The company boasts that the USP of the bus it that it does not emit harmful CO2 into the atmosphere.

“The systems are fully run on green energy so things to do [with] polluting the environment which ultimately will affect us, and that’s the reason why you would work on such a products because in the future we’re looking at sustainable and green energy,” said Obuwa.

This solar-powered bus also helps save money on petrol by relying 100% on abundant, renewable sunlight.The prototype bus is expected to cost more than $140,000 (Approx. Rs. 9386600).