The data demonstrate the critical snow-load of Trina Solar’s five modules exceeded 6,600 Pa, getting up to 7,000 Pa, equivalent to the pressure generated by 2.8 meters of snow, much higher than conventional non-uniform snow-load norms. This is sufficient proof of the snow-load resistance of Trina Solar’s Vertex 670W modules. 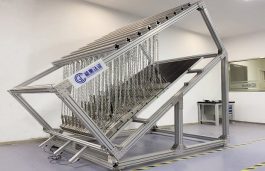 Moreover, the strong convergence of the non-uniform now-load testing of the five modules reflects the product’s excellent quality consistency. The current path taken by PV modules is increasingly high power and expanding module size, which creates challenges for module materials, design, and processes.

PV modules that pass this standard test exhibit two characteristic values: the value of snow load that accumulates on the surface when the module fails, and the power attenuation value and electrical safety performance of the module under critical snow-load conditions.

Combined with the ultimate load capacity of Trina Solar’s Vertex 670W modules and a standard introduction of a safety factor of 1.5 for the final snow-load test, the 670 module power attenuation was just 0.56%. This test result thus demonstrates Trina Solar’s Vertex 670W modules – not only integrate advantages of high-power, high-efficiency, and large-size cells – but also possess excellent snow-load resistance.

Back in April this year, the firm announced the official worldwide launch of the TrinaTracker Agile 1P Dual Row on April 15. Agile 1P tracker is fully compatible with ultra-high power modules ranging from 400W to 670W+.