From self-charging cars to buildings that are self-sufficient in energy, solar power is set to transform the traditional use of energy in the not too distant future.

In a session titled “Solar Beyond The Power Sector,” participants at the International Solar Alliance’s First World Solar Technology conference brainstormed over the many unconventional uses of the sun’s energy that are in the pipeline. 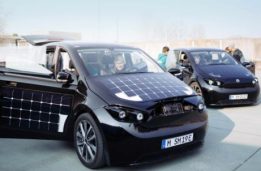 A Self Charging Car From Sono Motors

Arun Ramakrushnan of Germany’s Sono Motors unveiled a self-charging car prototype that can on a sunny day run up to 30 kilometres per day by incorporating photovoltaic panels on the body.

The distance is less than the daily average commute of people in Germany. If the same car was to be introduced in the Indian capital of Delhi, the same vehicle can run up to 27.2 kilometers every day in spite of the city’s infamous smog.

But if the smog were to clear due to the widespread use of clean energy cars, then the same vehicle can squeeze out 36.3 kilometers per day — which is again more than what the average commuter needs in a day.

With photovoltaic panels implanted on the body that is integrated with technology inside, the car can be positioned to capture the maximum amount of light for charging while it is parked.

If a user were to take the vehicle out for a longer run than the daily commute, basking in the sun during a Sunday can provide the extra charge needed. The vehicle technology — with a 94% efficiency of power use –can also be replicated for trains, trucks and boats, Ramakrishna said.

The multiple uses of solar does not stop at transport alone.

David Richard, chief executive officer at France-based Acticskeen, showed a brown villa with a stylish facade to participants which has as many as 1800 PV cells to provide all the energy occupants would need.

Similarly, the manufacture of steel would no longer require the use of dirty coking coal in the future by using a solar-based energy process. These are some of the examples of technologies that are in the pipeline for making Europe fully decarbonised by 2030.

Such innovation won’t be confined to developed nations alone.

Eric Sotto, chief executive officer and co-founder of Akuo Energy, said that the company was pioneering the use of AGR I energy, wherein solar energy and organic farming go hand in hand. The technology fulfils the most basic requirement of food and energy in difficult geographies like Islands.

In the Indian Ocean, farms on islands are making use of the technology wherein the rooftops of green houses are used to provide solar energy, while food crops are being cultivated below.

Miguel Juan Revolo Acevedo, minister of energy for the Republic of Peru, said that they were planning to triple the nation’s solar power generation by 2030 to improve the quality of life of the nation’s residents in multiple ways besides electricity generation.

Peru pioneered the use of rooftop solar, but now is looking to extend the use of technology in other areas. They have launched pilot tests of E-buses as a solution to commuting needs and making its own modest contribution to reducing global warming, the minister said.

Besides, solar based units are also being used to draw out water from the ground to fulfill large rural requirements for crop cultivation, he added.

The panelists were part of a technical panel at the First World Solar Technology Conference, held virtually, out of New Delhi. FICCI was the organising partner.