RERC has now announced that all rooftop solar Net-Metering agreements upto June 30, 2021, will be honoured for their contract durations.

The Rajasthan Electricity Regulatory Commission (RERC) has announced that after receiving comments and objections from stakeholders on its draft Regulations for Grid-Interactive Distributed Renewable Energy Generating Systems, 2020, it will now work again on issuing finalised Regulations in due course of time. But, in the meanwhile, to bring regulatory certainty – Rooftop and Small Solar Grid-Interactive systems commissioned under Net-Metering agreements upto June 30, 2021, shall continue to operate under the Net-Metering arrangement till the period of connection agreement. 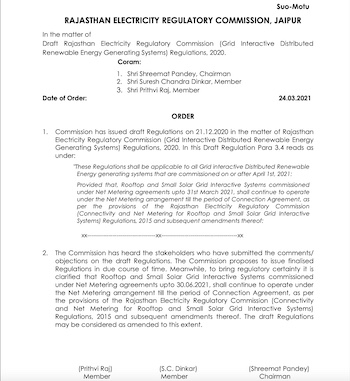 In December 2020, the state commission had issued the draft Rajasthan Electricity Regulatory Commission (Grid Interactive Distributed Renewable Energy Generating Systems) Regulations, 2020. In this draft, it was stated as a provision that:

“These Regulations shall be applicable to all Grid-interactive Distributed Renewable Energy generating systems that are commissioned on or after April 1, 2021:ERC Net-Metering June 30

Provided that, Rooftop and Small Solar Grid-Interactive Systems commissioned under Net-Metering agreements upto March 31, 2021, shall continue to operate under the Net-Metering arrangement till the period of connection agreement, as per the provisions of the Rajasthan Electricity Regulatory Commission (Connectivity and Net Metering for Rooftop and Small Solar Grid Interactive Systems) Regulations, 2015 and subsequent amendments thereof.”

The 10 kW cap on net-metering for rooftop solar installations has, since its announcement under the Electricity (Rights of Consumers) Rules 2020, garnered a lot of attention. A lot of that attention has been from smaller installers, and developers in the MSME sector, who for the sake of simplicity have called the net-metering rule to be a disaster.

In our recent story where we spoke to installers in states ranging from Karnataka, Andhra Pradesh, Delhi, Haryana, Maharashtra, Rajasthan, and Madhya Pradesh for their feedback on the net-metering cap, the response was as expected. Of the 24 owners/operating heads spoken to, 22 cited a major negative impact from the new rules on their business prospects.

The two exceptions in our ‘survey’? One has decided to focus exclusively on off-grid solar, while the other will continue to execute smaller residential rooftop projects and explore a diversification away from solar. One can argue whether a sample of 24 is representative enough, but combined with the broader voices we have heard and reported on ever since the issue first came up, we believe this sample is a very accurate depiction of the impact of the 10 kW rule on solar growth, especially rooftop solar.

The reaction of these installers has been heard by the Government and was confirmed by Power Minister RK Singh in the Rajya Sabha on March 23, 2021, when he said that “representations have been received from various stakeholders under MSME sector for carrying out amendments in the provisions related to the rooftop solar PV system. These representations have been examined and it has been decided to carry out amendments to these rules. The amendments will be made in the Electricity (Rights of Consumers) Rules, 2020 after following the laid down procedure.”