The Ministry of Power has recently issued the draft rules providing for the ‘Rights of Electricity Consumers’ for the very first time. However, one provision included in the draft rules has managed to roil up smaller solar EPC companies at a key proposal within the rules.

The power ministry stated that “having provided access to electricity to all citizens, it is now important to focus on consumer satisfaction. For this, it is imperative to identify the key services, prescribe minimum service levels and standards with respect to these services and recognise them as rights of consumers.”

While the rules claim to place the consumer in the middle of the power ecosystem as its most important stakeholders, small solar EPC players claim that the proposed rule fails on both measures, ie, being consumer-friendly, or being solar-friendly.

The provision in question is the 4th sub-clause under the 9th clause of the draft rules “Consumer as Prosumer.”

To understand the impact this can have on solar EPC developers and consumers or prosumers, the difference between net metering and gross metering needs to be understood.

As explained by the Council on Energy, Environment and Water (CEEW), net metering is an arrangement in which electricity exports are adjusted against imports, directly lowering the final electricity bills of the prosumers, such that, electricity produced is deducted from the total electricity consumed over a fixed period of time. The adjustment may be done either on a monthly, half-yearly or annual basis. Typically, a bidirectional ‘net meter’ accounts for both import and export of power. 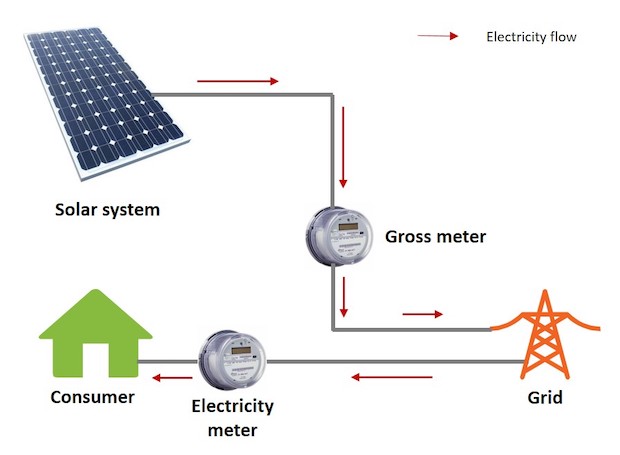 While on the other hand, gross metering is an arrangement in which a consumer is compensated at a fixed feed-in-tariff for the total number of units of solar energy generated and exported to the grid (accounted by a unidirectional ‘gross meter’) and has to pay the electricity distribution company (Discom) at retail supply tariff for the electricity consumed from the grid. The feed-in-tariff and retail supply tariff are typically different rates, with the retail supply tariffs always considerably higher. thus, in Delhi, for instance, a retail consumer at the top end of the consumption slap could be paying Rs 8 per unit for her consumption, and in gross metering, earning well under Rs 3 per unit.

Thus, under gross metering connections, the compensation or benefit of the installation of a rooftop solar system to the prosumer is drastically reduced. While at the very opposite end of the line, Discoms that provide the connection are benefited as gross metering can be seen as a revenue protection measure for them.

A revenue protection measure for Discoms provided in the ‘Rules providing Rights to Electricity Consumers’.

Solar EPC developers have come up together against the move because net metering allowed them to sell the electricity they produced from their big rooftop projects for C&I customers to the grid and deduct its value from their bill for the power drawn from the Discom. A big revenue point for rooftop solar developers – their C&I customer projects – which are invariably of over 5 kW capacity will be moved to gross metering effectively slashing their profits to the bare minimum.

The rule to move all installations above 5 kW to gross metering “will hamper all of us small solar EPC companies that rely on solar rooftop net metering for our bread and butter,” said a Sr. Engineer working at one of the many small to medium solar EPC companies that currently operate across India. “This draconian rule must be highlighted and sought to be cancelled by any individual who is concerned about renewable energy,” he added.

The view of the rest of the industry is also similar. A petition has been filed on change.org asking for the rule to get abolished in a move that will (as it claims will) save the solar industry!

The petition states that this clause:

Interestingly, Discoms have been pushing to move rooftop solar generation to gross metering for a while now, having given up on the idea of resisting it altogether earlier. In states like Maharashtra, a strong pushback against similar ideas prevented such a shift.

The draft rules have been circulated by the Ministry of Power for comments/ views/ suggestions from consumers latest by September 30, 2020. After this, the suggestions will be evaluated and the final rules issued.

Our view on this is that the issue of net metering is an established option to drive rooftop solar growth worldwide. Setting such a low benchmark for net metering of 5 KW certainly doesn’t serve the consumer cause or the solar sector even, it only serves the Discom cause. In a draft titled “Rights of Electricity Consumers”, there is no place for such a provision.