Renewable Energy Output Exceeds Coal in US for the First Time

IEEFA says the renewable energy sector, which includes hydro, biomass, wind, solar, and geothermal energy, is expected to produce more electricity in the US than coal in both April and in May of this year. 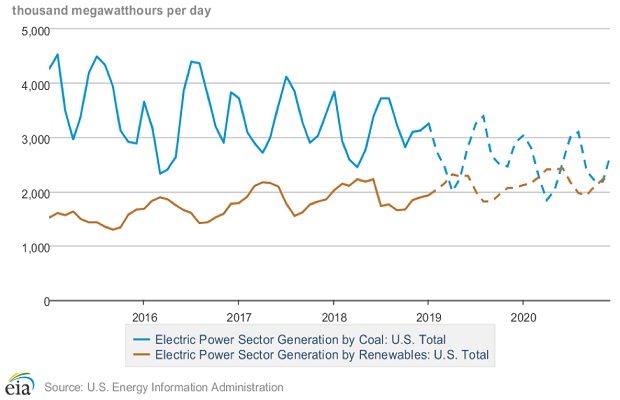 According to the EIA’s latest Short-Term Energy Outlook, coal-fired power plants only accounted for 20 percent of total U.S. electricity generation in April, while renewables made up 24 percent. It’s the first time on record that renewable energy generated more than coal on a monthly basis. The trend is expected to continue in May, with coal accounting for 21 percent and renewables capturing 22 percent. Natural gas is the largest source of electricity in the U.S. at this point, taking home 35 percent in April and expected to account for 36 percent in May.

An analysis by Energy Innovation shows that in 74% of cases it is cheaper to build new wind and solar than to keep running existing coal plants today and that number will increase to 86% by 2025. Still, renewables account for less than 10% of all electricity generated in the United States overall at the moment.

Recent investments into wind and solar energy have also helped decrease the cost of renewable energy, which means that now people can afford to install solar panels in their homes. Not to mention, the current climate crisis has led to businesses, governments, and private citizens demanding cleaner energy sources especially for solar energy in India.

Interestingly, renewable energy will only produce 18% of U.S. electricity in 2019, and around 20% in 2020, according to the IEEFA. While those figures are increasing slowly but surely, renewable energy still has a long way to go before it provides the majority of the US energy.

Tags: IEEFA, International, Renewable Energy in US, US Energy Generation
"Want to be featured here or have news to share? Write to info[at]saurenergy.com