Home » News » Proposed Scheme On Discom Dues Could Lead To Rs 9,000 Crore Flow Towards RE Developers

Proposed Scheme On Discom Dues Could Lead To Rs 9,000 Crore Flow Towards RE Developers

Leading ratings firm CRISIL estimate that the proposed scheme for liquidating discom dues could be a windfall for RE developers, among others.

Rs 9,000 crore over the next two fiscals could be released for RE developers, states the firm.
This could majorly impact the receivables period of leading RE gencos of 40-50 days from the current 180 days by March 2024. Not just that, this also has potential to enhance the equity returns of projects by up to 1 percentage point, as per a CRISIL Ratings analysis.

CRISIL states that payment stretch has been one of the key risks for the RE sector.  Although the share of central counterparties reflected an increase, leading RE gencos had receivables of close to six months (similar to March 2019 level) in March this year. These clear payments within 30 days of due date in their operational portfolio.

The payment  stretch of the receivables can be attributed to delays in payments by select state counterparties including Maharashtra, Rajasthan, Madhya Pradesh, Telangana, and Tamil Nadu. These have a high proportion in the offtake mix of RE gencos, with receivables of 8-14 months over the past three fiscals.

The unpredictable payment profiles of discoms with large variations further add to the problem. In a significant difference, the receivables cycle of the Telangana discom witnessed a rise to 400 days as on March 31, 2022, from the initial 250 days as on March 31, 2019. For the Maharashtra discom, it saw a dramatic surge to 300 days from 70 days (refer to chart below). 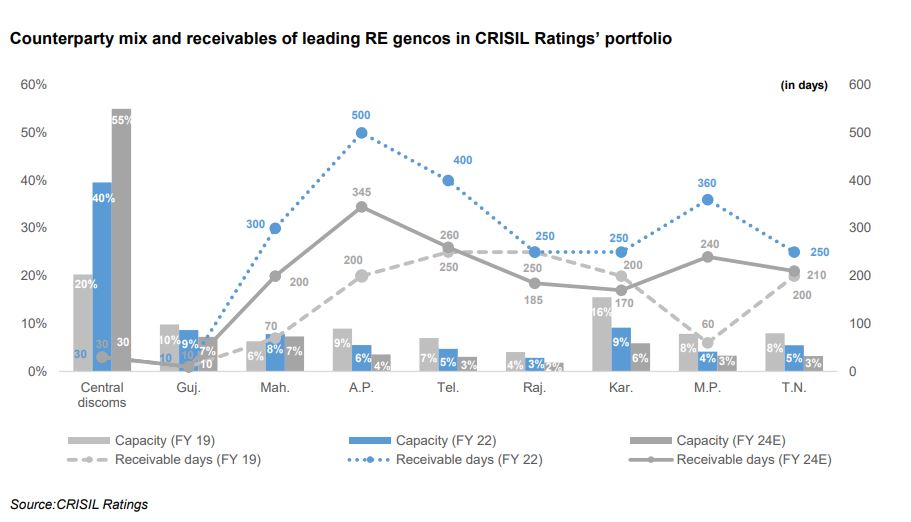 The Gordian Knot- The Payment Stretch

A dramatic payment stretch can lead to cash-flow mismatches for RE gencos, that depend on liquidity buffers and working capital to service their own debt. This, in turn, compels them to go for additional working capital- the cost of which depresses equity returns.

Reaping The Benefits Of The Scheme

Under the scheme proposed, RE gencos will have immediate liquidity gains while enhancing their payment profiles at the same time. The scheme makes provisions for dues such as late payment surcharge (as on the cut-off date of June 3, 2022) to turn into monthly instalments that discoms will pay over the following 12-48 months.

Says Manish Gupta, Senior Director, CRISIL Ratings, “The Rs 9,000 crore of liquidated dues can support equity investments in 24 gigawatt of under-implementation projects over the next two fiscals. Our calculation presumes financially stronger discoms — such as in Gujarat and Maharashtra — would show better payment periods for RE projects compared with others that are expected to pay with an average delay of 3-5 months.”

Almost half the improvement of 40 to 50 days foreseeable in the receivables cycle of RE projects can be attributed to the dues liquidation scheme. Furthermore, RE gencos analysed by CRISIL have benefited in the past from a rise in the share of central counterparties (up to 40% last fiscal from less than 25% in fiscal 2019) in their operational portfolio.

Says Ankit Hakhu, Director, CRISIL Ratings, “The share of central utilities is expected to increase further to ~55% over the next two fiscals as a majority of the capacity to be commissioned has power purchase agreements tied up with central counterparties. This is expected to contribute the balance projected decrease in receivable days of 40-50 days by March 2024.”

That said, such schemes can provide only temporary liquidity relief till a long-term solution to tackle the financial and operating problems of state discoms is chalked out, states CRISIL.