Nasdaq listed ReNew Energy Global (ReNew Power), which announced its Q4 results for FY 22 yesterday (June 15), hosted its analyst call later in the evening. We bring you some of the key highlights from the call, where Founder, Chairman and CEO Sumant Sinha Spoke, along with new CFO Kedar Upadhye, Chief Sustainability Officer Vaishali Nigam Sinha, and Kailash Vaswani, President, Finance.

The big new announcement was the expansion of module manufacturing capacity to 6 GW.

“We are increasing our module manufacturing capacity to six megawatts, which will produce about 3.3 gigawatts of AC or PPA equivalent capacity after we consider the additional DC oversizing in projects that we do to enhance term. All of it will be for internal consumption. We expect that this will cost us no more than about 3% to 4% of our three year CapEx forecast. And all of the output is for our own users, to provide security of supply and enable us to achieve our growth targets on our core business, which is renewable energy development”, said Sumant Sinha. He also spoke about further backward integration into wafer manufacturing beyond cell manufacturing, based on the contours of the second phase of the PLI policy for solar manufacturing, expected in the coming few months.

Starting proceedings, Sinha highlighted a key advantage for ReNew by pointing out that the opportunity for RTC (round the clock power) projects is much bigger now, and “ReNew is one of only a couple of companies in India that has the capability to build high PLF renewable energy projects on a large scale. We believe that as we advance our IP in the energy space, through continued development of artificial intelligence and vertical integration, we will expand our competitive advantages further over the coming years.” 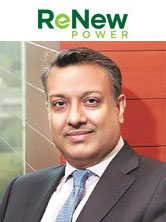 Highlighting the 49% minority sell to Mitsui of its 400 megawatt RTC project, Sinha pointed out that  the amount of EBITDA per $1 of shareholder equity has increased by over 25% and this large project is now expected to earn equity IRR of well over 20%.

Analysts were informed about 500 megawatts of new PPAs with corporate customers signed last month, taking the total portfolio of corporate accounts to about 1.3 gigawatts, including more than 900 megawatts with PPAs, a threefold increase in about a year. The company is also in discussions with CNI businesses for about 1.3 gigawatts of additional new contracts. According to Sinha,  the corporate business generally has higher returns than plain vanilla projects and provide additional confidence in maintaining the targeted  16% to 20% equity IRR.

Six to nine gigawatt RTC auctions are expected in the near term by the firm. In addition, Indian railways the largest single consumer of electricity in India, has announced their interest in contracting for RTC renewable energy supply to meet the net zero targets by 2030. They currently use about 30 gigawatts of baseload power, which could represent a significant amount of renewable energy capacity, or close to 100 GW in fact.

With the firm expecting the power market to remain tight on the back of rising demand and little non-renewable capacity additions, it didn’t rule out a closer look at power trading in the near future.

Sinha also highlighted the notable progress towards reducing our receivables through several court orders, including an important ruling from the High Court of Andhra Pradesh, an order that the Supreme Court will shortly decide on taking up the appeal from AP government further. IN the meantime, AP Government has written to the Power Ministry for loans from PFC and REC to repay generators.

Elaborating further, Upadhye highlighted that “we have for the first time ever taken our customers to court for accelerated recovery. We have made some progress towards improving the DSO, which ended at 212 days as at the fiscal year end down meaningfully from the peak in second quarter, which was at 272. After the High Court directed the Discoms in Karnataka to clear all outstanding dues payable, which was about $90 million at the beginning of the calendar year. We have received about $65 million. Maharashtra has also paid about$ 7 million of back old bills, since the state electricity regulator directed the state distribution company to clear all outstanding receivables. We also received a recent favorable ruling from the regulator in Madhya Pradesh or MP on a 60 megawatt project and we are submitting petitions for other facilities in the state as well. We are also pursuing actions in Telangana to expedite payments. Regarding the situation in Andhra Pradesh, which has the largest account of civil outstanding at about $230 million on March 15. The High Court ruled in our favor. Since then, AP has filed request to delay payment and they also have filed requests for appeal of the ruling with the Supreme Court.”

At current exchange rates, the FY23 EBITDA would be in the range of roughly INR 880 to INR 920 million, and cash flow to equity would be approximately INR 280 to INR 300 million. The guidance includes an assumption that the weather impact will be about $40 million to $60 million, about half of the impact that the company saw in  FY22 after adjusting for about 20% growth in megawatts.

Lower financing costs have played a key role in helping the firm combat supply side cost pressures. Citing the example of refinancing activities or conditional redemption of a $525 million green bond, which carries about 10.5% in Rupee terms, where the firm plans to finance it with the 8% to 8.5% loan offers from non-bank financial firms. About 75% of ReNew’s debt is fixed with an average period of approximately four years.

Conclusion: While the broad picture painted by the ReNew top management is a fair representation of the opportunities and challenges India’s market continues to throw up, it does highlight the high sensitivity the firm continues to have to interest rate changes as we are witnessing now. A faster escalation of rate hikes will impact the whole sector, along with any hike in the risk premium for India. With foreign funding still dominating the space for almost all the large players, that remains a significant risk. Expect large equity deals to continue to find favour.