Mangalore Refinery and Petrochemicals Limited (MRPL) has successfully commissioned the largest solar power project in a refinery site in Karnataka. The solar power project commissioned by TATA power solar has a total capacity of 6.063 MWp and is spread across 34 roof tops within the refinery premises. Managing it all are GoodWe inverters, that were picked for the purpose. MRPL’s project site processes 15 MTPA (million tonnes per annum) of oil and chemicals at its refinery. The firm is a Category 1 Miniratna Central Public Sector Enterprise (CPSE) under the Ministry of Petroleum & Natural Gas. 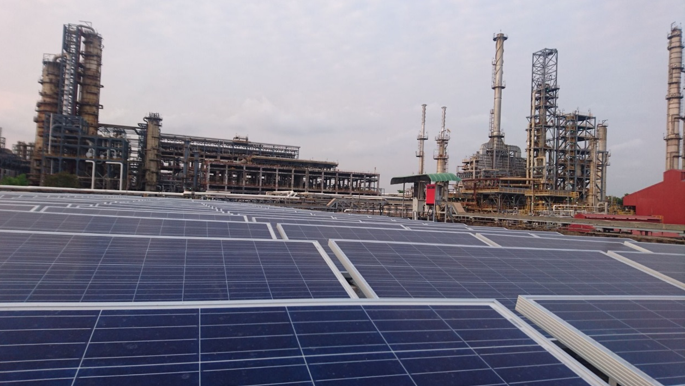 The project had its share of challenges as the refinery area has huge premises comprising of 34+ buildings. There is no internal transport available for commuting from one end to another and third party vehicles are not permitted. Covering such a large area without transportation was a major obstacle and represented a significant challenge.

There are also defined protocols and strict guidelines for entering the premise and each plant requires a different work permit.

The proximity of chemical gases in some of the areas also posed a challenge as the inverters could be at a risk of rusting due to chemical reactions that can take place in a gaseous environment. Featuring 150% DC oversizing and 115% AC overloading ratio, this 6MW solar project with GoodWe MT G2 series is running smoothly and efficiently. GoodWe believes that the long-term returns and profitability will reinforce the faith of business owners for solar energy.

GoodWe installed 95 inverters of 50K-MT G2 and 60K-MT G2 model and these solar plants generate more than 24,000 units per day amounting to more than 8.8 million units per annum.

The MT Series is equipped with IP66 enclosures, which means the inverter is protected from total dust ingress and high pressure water jets from any direction. The C5 corrosion class also protects the inverters from high humidity and adverse atmospheric conditions.

For MRPL, the solar plant is part of its own commitment to sustainable development with a focus on reduction in carbon emissions and higher renewable energy generation. In doing this it joins an increasing number of firms across India that are shifting to solar power to reduce their overall carbon footprint.