GoodWe Adds Another Success Story, In Gujarat This Time

Inverter firm GoodWe, one of the leading players in the rooftop segment until now, has been making strong progress in the broader C&I space and ground mounted space too. The Saurashtra region of Gujarat, a solar hotspot for India now, with its strategic geographical advantage of abundant sunshine throughout the year has been  happy hunting ground for the firm. That means many firms in the region are looking at solar to get access to clean energy at a lower cost, following a broader trend of firms looking at doing the same.

A typical happy  customer is Microtech Rollers Pvt. Ltd., an ISO/TS 16949:2009 certified company founded in 1994. A manufacturer of forged and machined bearing races, Microtech had been considering ways to reduce its carb9n footprint, primarily by tackling its energy usage, for some time.

Eventually, the firm fixed on solar, as the best way to change its energy mix from a thermal dominated grid and diesel (for backup power) to Solar. Microtech took to solar with a vengeance, installing plants across locations where it had its plants in Saurashtra.

The total 15MW of solar projects  have proven to be a more than adequate alternative for Microtech to meet its energy needs from Solar.  GoodWe ended up delivering 136 GoodWe MT80KW inverters for this landmark setup they is currently generating electricity of 27GW/ year. 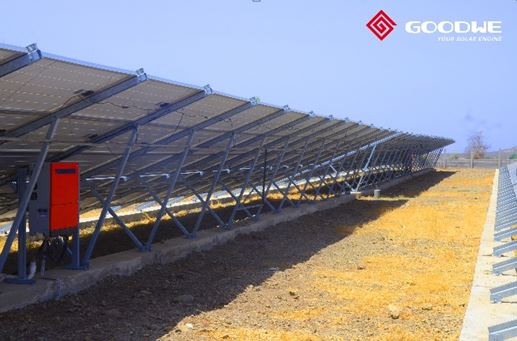 One Of the Microtech Solar Plants

For Microtech, 4 MPPT and 150% DC oversizing made the GoodWe MT series the ideal choice for medium to large-scale commercial roofs and farm plants. The MT series is able to operate in full load even at 50 degrees which maximizes the ROI for the investor. The range boasts advanced topology and innovative control technology to achieve a maximum efficiency of 99.0%, aimed at maximising long-term returns and profitability for the system owner.

Mr. Harsh Bhanvadia from Microtech Rollers Pvt Ltd. said “We purchased 136 inverters from GoodWe and installed at our various sites in Saurashtra region, we have our best site at Khirasara which is 4 megawatts of single axis solar trackers in which our GoodWe inverters are performing at its peak performance for 6 hours daily. So, we are extremely satisfied with the power output of GoodWe inverters and the monitoring system which GoodWe provides with their inverters is also very good.”

GoodWe, which considers a key market globally, the deal is yet another instance of a customer picking the brand for its reputation, specifications, and the service standards they promised. A 20 member service team based out of Mumbai ensures response is quick, with support available on phone too.

The firm has an impressive list of projects like Rajikok-15MW, Cochin Airport-10MW, MRPL-6MW, Bosch-4MW, Siemens-2MW, etc. The firm claims that  GoodWe products have been trusted at the premises of leading developers  likeTATA Power, Sterling & Wilson, Fourth Partner, Renew, Amplus, Adani, Harsha Abakus, Atria, etc, demonstrating its credibility where it matters.

With the firm maintaining warehouses stocked with spares for almost contingencies on its models, it’s clearly a strategy that has paid off well in Saurashtra, and India.