Home » News » Diageo Commits to a Renewable Future in Africa

Diageo Commits to a Renewable Future in Africa 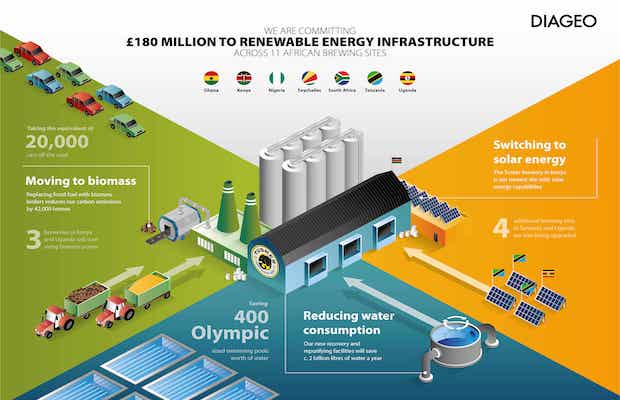 British multinational alcoholic beverages company, Diageo has announced that it will invest GBP 180 million in renewable energy resources across its sites in Africa to ensure that it breweries are the most carbon and water-efficient.

“This commitment represents Diageo’s largest environmental investment in a decade confirming our commitment to reducing our carbon footprint and addressing climate change,” the firm issued in a statement.

Wood chip, bamboo and rice husk would create steam power, cutting emissions and creating jobs with local farmers providing the raw materials. Solar panels would be rolled out at facilities in six countries, starting with Kenya and Ghana, producing up to one-fifth of each breweries’ energy needs. Recovery, purification and reuse facilities at five breweries, meanwhile, including in Kenya, Uganda and Nigeria, would save two billion cubic litres of water a year, Diageo said.

“We believe this is one of the biggest single investments in addressing climate change issues across multiple sub-Saharan markets,” Diageo chief executive Ivan Menezes said in a statement. “It demonstrates the strength of our commitment to minimise our environmental impact and crucially take action.” Diageo, which produces Guinness stout, Smirnoff vodka, Baileys liqueur and Johnnie Walker whiskey, has committed to reducing its carbon emissions from direct operations by half by 2020.

“We’ve set ourselves ambitious environmental targets, aligned with the United Nations global SDG’s, and our efforts to deliver on these by 2020 continues at pace. Progress has included a 45% reduction in our carbon emissions and a 44% reduction in our water consumption over the past decade, while we also now look to the future and how we extend beyond 2020 with this investment.”

Africa produces 13 percent of its global sales and is the largest region by volume for beer. It operates 12 breweries across the continent.

Its newest facility, in the western Kenyan city of Kisumu, already has solar and water recycling capabilities. Another plant bottling the Kenyan beer Tusker operates on 100 percent renewable energy, the company says.