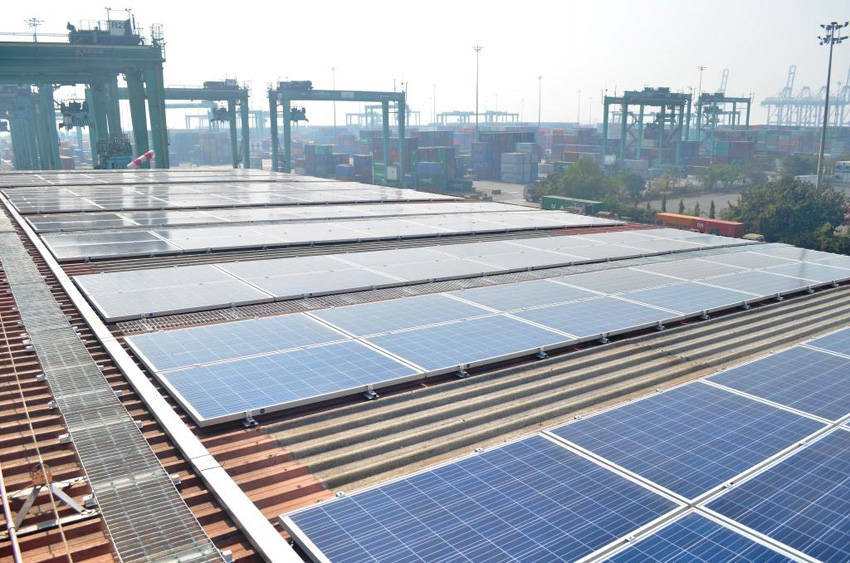 First phase of the solar panels tasks, which is currently in progress, included establishment and enforcement of solar boards on the roof of APMT Mumbai workshop and Central Gate Complex to capture and store energy from the sun.

Presently, the framework is completely operational and the conversion of gathered sunlight’s into power storage has already started. In the first phase of the initiative, rooftop solar boards are relied upon to generate solar power of up to 361,000KWh Units per year.

The second phase undertaking, which is required to be accomplished by June 2016, is set to produce an extra 220,000KWh Units per year by introducing solar boards on the rooftops of the ship to-shore (STS) crane machine houses.

The third and last phase of the clean power plant is relied upon the installation of more boards to cover the extensive surface areas, leading to the power generation of around 5 million KWh Units per year, which is approximately 15% of APMT Mumbai aggregate power necessity per year.

A representative from APMT states that, the operator wants to pilot its Mumbai terminal to learn best practices before presenting solar power plants, most of its terminals around the globe.

In a statement of the terminal operator state that, ‘The solar energy venture resulted from a feasibility study completed by the facility last year on the possibility to reduce traditional electrical power consumption by generating solar power’.

According to APMT, India is also one of the world’s largest producers and consumers of power and around 70% of the nation’s electricity is generated by smoldering fossil fuels.

In a statement of Ravi Gaitonde, Chief Operating Officer at APMT Mumbai states that, ‘The Mumbai solar panel ventures reaffirms our commitment to green power and caring for the Indian environment’.

The operator said that, ‘Accessibility to clean renewable energy sources will hold an important role for ongoing economic development. India’s populace is expected to expand by an estimate of 200 million (which is roughly Brazil populace) over the next 15 years’.