Home » Blog » Will Hydrogen Contribute Toward Energy Transition Of India?

Will Hydrogen Contribute Toward Energy Transition Of India?

The first few days of CoP27 have shown quite an enthusiasm for the potential of hydrogen to the energy transition. Government and private leaders have endorsed hydrogen as an opportunity and solution to decarbonise the economy. While the countries in the Middle East and North Africa (MENA) region are eager to exploit the potential of hydrogen in their energy transition roadmap, the third largest emitter of GHGs, India, must also consider hydrogen in its bid for a clean future.

The South Asian country is ramping up its share of renewable energy. Coal remains India’s primary fuel for power generation, even as the government has already started taking firm steps toward its goals of meeting half the nation’s energy demand from non-fossil fuels and building 500 GW of non-fossil energy capacity by 2030. As of now, hydrogen’s role in this transition remains a topic of speculation.

With emerging global momentum on hydrogen, India can exploit this decarbonisation opportunity not just within the context of a low-carbon economy but also as an enabler of energy security and economic development for the nation.

In India, green hydrogen will be crucial for achieving decarbonisation of harder-to-abate sectors such as fertilisers, refining, methanol, maritime shipping, iron & steel, and transport. Thus, it can be said that hydrogen can potentially provide a replacement for fossil fuels in industrial processes.

Green hydrogen is essential to India’s efforts to create energy security. But there is a need to push down the costs of green hydrogen to outcompete fossil fuels. The right government policies will play a crucial role in achieving these goals. Given the right policies, India can emerge as the least-cost producer and bring down the price of green hydrogen to US$ 1 per kg by 2030.

A Domestic Substitute for Natural Gas

India mostly imports natural gas. Natural gas, limited hydropower resources, and coal generators fill the gap of electricity from solar and wind. Green hydrogen isn’t just a cleaner substitute for natural gas but is also fit for purpose as a store of energy, and, therefore, useful in balancing intermittent electricity supply from solar and wind. Due to its high energy density – more than thrice that of diesel and heavy fuel oil – green hydrogen as a fuel is a breather in lowering emissions for shipping and other heavy road freight vehicles. Moreover, it can also substitute for coal in hard-to-abate industrial applications in steel and fertiliser manufacture.

Furthermore, a globally competitive green hydrogen industry can lead to exports of green hydrogen and hydrogen-embedded low-carbon products like green ammonia and green steel that can unlock 95 GW of electrolysis capacity in the nation by 2030.

India’s current output is 6.7 MT, produced mostly from natural gas. The biggest consumers of this hydrogen are refineries, chemical companies and fertilizer plants.

At present India’s $3.12 trillion economy needs 1,650 billion units of power, which is obtained from nearly 400 GW of capacity. Of this, green electricity is only 17 per cent. As the economy touches $5-7 trillion in the next decade, India will need at least ten times more, that is 3,000-4,000 GW.

New Delhi-based climate and energy research firm Council for Energy, Environment and Water research (CEEW) estimated that net zero emissions by 2070 will require 5,630 GW solar capacity, a 99 per cent reduction in coal use between 2040 and 2060 and a 90 per cent fall in crude oil consumption between 2050 and 2070. Green hydrogen may play a pivotal role in addressing these challenges.

As per a report – Harnessing Green Hydrogen: Opportunities for Deep Decarbonisation in India – released by NITI Aayog, green hydrogen can help abate 3.6 gigatons of cumulative CO2 emissions by 2050. Hydrogen demand in India could grow more than fourfold by 2050, representing almost 10 per cent of global demand. The Energy and Resources Institute (TERI) estimates 28 MT hydrogen demand by 2050. 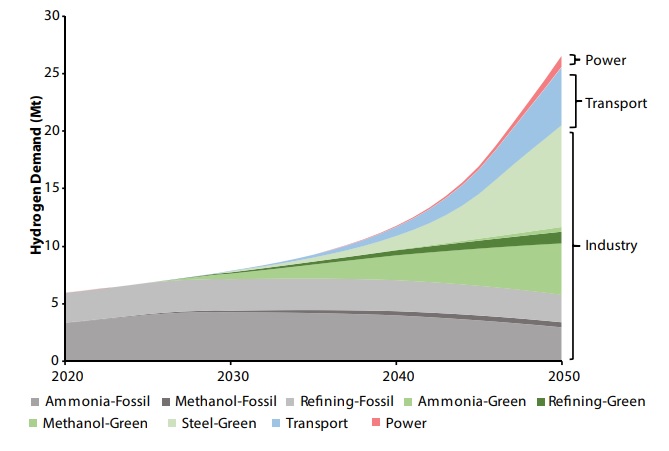 Green hydrogen not only possesses the potential to substantially spur industrial decarbonisation but also promote economic growth for India in the coming decades. The emergence of a green hydrogen economy is critical for India to achieve its net-zero ambitions by 2070.

India has now realised the importance of green hydrogen in achieving its emission reduction goals. Last year, PM announced a National Hydrogen Mission, which inter alia includes the development of Hydrogen as a fuel for transportation, to make India a global hub for green hydrogen production and export, boost self-reliance, and inspire, with its call for green growth and green jobs, a clean energy transition all over the world. The policy will help India achieve 5MT of Green Hydrogen production by 2030 as the country hopes to meet the larger goal of self-reliance in energy production by the 100th Independence Day in 2047.

Recently, PM also laid the foundation stone for the Green Hydrogen Mobility Project in Leh, as well as the Kawas Green Hydrogen Blending with Natural Gas project in Gujarat. The former is a test project in which five fuel cell-infused buses will ply around Leh, and the latter is India’s first green hydrogen blending project, which aims to reduce the amount of natural gas consumed.

Private firms are the engine for the adaptation of any new technology. In the case of hydrogen, several firms have taken initial steps. Reliance Industries Ltd. is seeking newer technologies to make electrolyzers in its efforts to produce low-cost green hydrogen in the country. Reliance is on a mission to produce green hydrogen at $1 per kilogram by 2030. Mainstream Energy announced the launch of a generator that can run on Hydrogen and Ammonia.

What India Needs to Do Next?

While the private players are making a move on hydrogen as an important fuel in the country’s transition to a green economy, the importance of state efforts can not be ignored. The policymakers need to provide certainty about policies and help build a market for green hydrogen.

India must adopt NITI Aayog’s suggested pathway as swiftly as possible. To counter existing grey hydrogen prices, near-term policy measures can go a long way to bring down the current costs of green hydrogen. Further, medium-term price targets should be set to guide the industry towards making green hydrogen the most competitive form of hydrogen.

GoI may identify industrial clusters, and enact associated viability gap funding, to encourage market development. In addition, there is a need for R&D and manufacturing of components like electrolyzers domestically. For this schemes like PLI will go a long way.