At 176.4 million tonnes annually, India is the global milk and milk products producer. There are over 1,200 large, medium & small dairy industries. The dairy industry is dominated by the co-operative sector with 60% of the installed processing capacity in this sector. Milk processing in India constitutes around 35% of total milk production, of which the organised dairy industry accounts for 13% of the milk produced while the rest of the milk is either consumed at farm level or sold as fresh.

Energy plays a major role in processing milk and milk products. In a dairy, primary energy sources such as furnace oil, etc. are used in boiler for generating steam which in turn is used for heating applications like pasteurization, evaporation, drying of milk. Nearly 30% of overall manufacturing cost is spent on purchase of furnace oil, electricity, which is substantial. Typical dairy plants derive about 70% of their energy requirements in the form of thermal energy and the remaining 30% is consumed in the form electricity.

As a part of the Indo-German cooperation project “Solar Payback” for accelerating Solar Heat for Industrial Process (SHIP) the study undertaken by Solar Thermal Federation of India has identified Dairy processing as topmost potential sector as shown in Fig. 1. 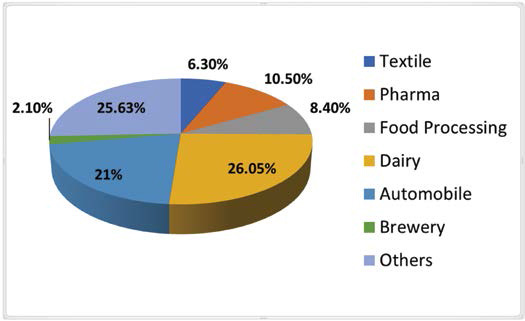 There is however no latest study available on the estimated replacement potential of fuel oil/biomass using solar thermal energy. PricewaterhouseCoopers had undertaken an analysis on the percentage wise use of fuels in a typical dairy processing unit using Annual Survey of Industries database as shown in Figure 3. 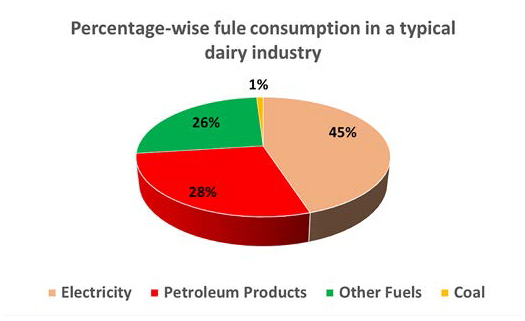 Figure 3 indicates that electricity drives most of the processes in the industry, followed by petroleum products and other fuels such as rice husk, firewood, etc.

The assumption is crucial for a conservative and pragmatic estimate of the energy replacement potential considering the Direct Normal Irradiance (DNI) available in different parts of the country. Fig. 4 below is the map of DNI over India.

National Dairy Development Board (NDDB), a national Institution to support policies for growth of farmers has already implemented 15 pilot SHIP projects in the country and are showing promising results. There have also been several learnings on the grey areas. Dilip Rath, Chairman NDDB said “solar thermal is idyllically win-win for a typical dairy processing in India. Mandatory heat demand supported with higher subsidies for renewable energy technologies will positively attract dairies. Close to 9GW of demand exists for chilling in all dairies in India where solar thermal can be useful.” 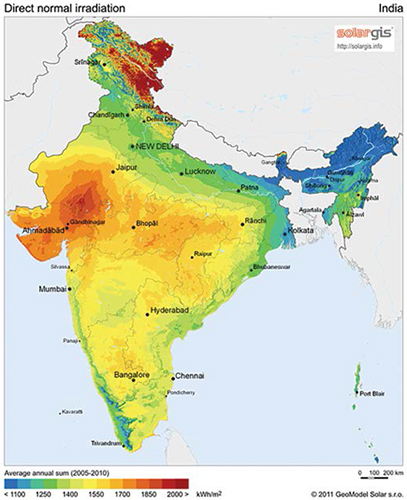