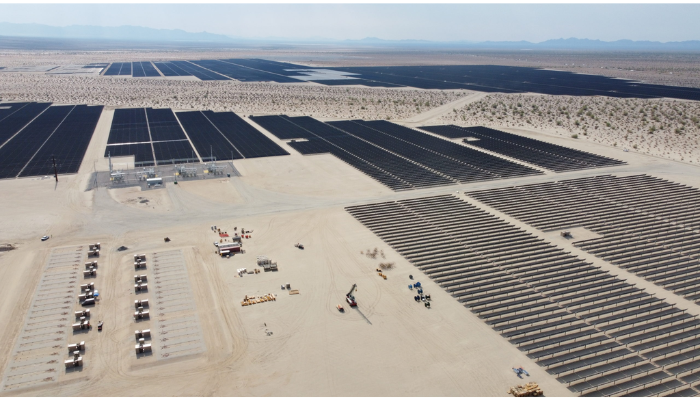 The 457 MW solar “Palen Solar Project” by EDF Renewable Energy, a leading renewable energy producer based out of the UK, has reached full power operation. The solar project is situated on public land in Riverside County that the US Bureau of Land Management (BLM) has determined to be suitable for the development of renewable energy sources, along with a 50MW battery energy storage system (BESS).

“As with all the department’s clean energy projects, the Bureau of Land Management has seen this project through to completion with extensive engagement with Tribal governments, local communities, state regulators, industry, and other federal agencies,” said Laura Daniel-Davis, Principal Deputy Assistant Secretary for land and minerals management at the US Department of Interior.”

The BLM initially granted permission for the project to build the solar-plus-storage facility in 2018, and it has since been developed in five phases, the most recent of which is the 50 MW battery storage, beginning in December 2020.

EDF Energy and Shell had previously agreed to a Power Purchase Agreement (PPA) for a 100MW tranche of the solar project.

Less than a month after the BLM gave its approval for the building of the 500MW co-located “Oberon solar” project in the southeast desert of California, the 457MW solar PV project witnessed successful completion.

The BLM has stated, “Regulators are reviewing 64 utility-scale onshore clean energy projects that could be generated from solar, wind, and geothermal energy on public lands in the western US; these projects could bring more than 41,000 MW of renewable energy to the Western grid in the future years. 51 applications for testing wind and solar power as well as 90 preliminary evaluations of applications for solar and wind development are also in progress.”

Earlier, EDF Renewables had begun to prepare and construct the site on two approved solar farms in the United Kingdom, with the projects totaling almost 100 MW every year. The solar projects were 49.9 MW each in different parts of the United Kingdom. That apart, EDF Renewables was awarded three large solar projects by New York State Energy Research and Development Authority (NYSERDA). The total capacity of all three renewable projects was 1GW which is including with 20 MW of co-located battery storage also.