GM is expected to hit 5 million in cumulative electric vehicle sales by 2030 according to new research from Wood Mackenzie.

General Motors (GM) has set an annual target for 1 million electric vehicle (EV) sales globally by the mid-2020s. Although the company will only meet half of that target by 2026, it is expected to hit 5 million in cumulative EV sales by 2030 according to new research from Wood Mackenzie.

The research adds that the firms’ primary markets are currently North America and China, while the company also has a strong market share in South America. Due to declining sales and profits, GM sold its European brands in 2017 and exited the regional market. The EU is the second-largest EV market in the world, representing 25 percent of global EV sales by 2026. And according to WoodMac, without a presence in Europe, GM will need to win 30 percent of the US and 16 percent of the Chinese EV market to achieve its target of 1 million annual EV sales by 2026. It currently has 4.5 percent and 6.7 percent, respectively.

This challenge is compounded by the fact that 17 percent of current GM sales are from pick-up trucks, a segment not expected to electrify as quickly as passenger cars, added the report.

“GM’s target would entail capturing 12 percent of the global EV market share by 2026. This will be challenging, particularly given its notable absence from the EU. 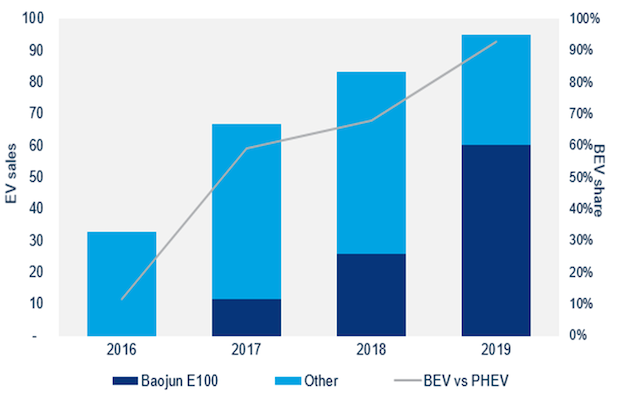 “Despite this, GM does have a clear-cut strategy towards electrification. It has divested from plug-in hybrids, with 90 percent of its EV sales coming from battery electric vehicles (BEVs). Earlier this year, GM announced a further USD 20 billion investment for new electric and autonomous vehicles.

“The modular electric drive platform is designed to fit vehicles of different classes. GM claims it will have a battery control unit at a module level, which can lead to more cost-effective repairs. The chemistry of the battery packs will be NCMA, therefore improving costs further by reducing cobalt by up to 70 percent.

“However, neither the platform nor the battery technology is ground-breaking,” said Ram Chandrasekaran, Wood Mackenzie Principal Analyst.

The firm had also recently agreed on a joint venture with LG Chem for a battery manufacturing plant in the US. Each company will contribute half of the USD 2.3 billion investment for the plant.

“If completed, this would be one of the largest battery manufacturing facilities in the world. The factory is intended to supply packs for GM’s electric pick-up trucks to be sold in the US. The initial planned capacity is 30 GWh, however, the plant will be built with future expansion in mind,” added Chandrasekaran.