In its latest report, Wood Mackenzie has revealed that Electric Vehicle (EV) sales are expected to reach 62 million units per year by 2050, with a total global EV stock reaching over 700 million. 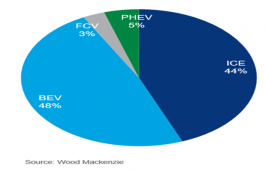 The report explained how the EV market would grow in the coming years, in main developed countries like China, Europe, and the US. As the report says EV sales are expected to top a combined 7 million a year by 2025. However, it is not going to happen just like that but, several factors will accelerate the process as Improved EV costs will propel sales and double EV numbers to a combined 15 million a year in those three regions by 2030.

Speaking on the analysis, the Principal Analyst at Wood Mackenzie, Ram Chandrasekaran stated, “In 2020, global EV sales surged 38 percent despite a decline of 20 percent in all car sales. Emissions regulations in western Europe were successful in doubling EV adoption despite the crippling coronavirus pandemic. This provides a roadmap for other countries and regions with similar goals to stimulate EV sales growth.”

He further explained the current scenario as Today’s major automakers – Volkswagen, Tesla, General Motors, Fiat-Peugeot, Renault-Nissan, and Hyundai – will continue to make up a large share of future EVs.

“Most automakers are a few years behind Tesla in terms of technology and efficiency. However, they can quickly outgun Tesla when it comes to manufacturing capacity and quality,” Chandrasekaran added.

However, the annual commercial vehicle sales are projected to reach 6.4 million by 2050, while global stock will expand to 54 million.
At a colossal 88 percent of the total 416 million charging outlets globally by 2050, residential chargers are projected to be the primary mode of charging for EVs globally.

Consequently, reports show how EV sales are going to surge with leading electric buses and light trucks, annual commercial EV sales are expected to top 3 million by 2025 and triple to nearly 9 million by 2030.

Not only the increasing demand for EVs but, the reduction in oil demand for vehicles globally has been included in the report.

As Chandrasekaran described, “Despite the growing dominance of EVs, global oil demand from light-duty vehicles is projected to reduce by only 24% over the next 30 years. The slow erosion of ICE stock and increased demand from emerging economies are the main reasons for this lethargic drop.”