The Ministry of Finance of GOI, in its Economic Survey 2020-21 released on January 29, 2021has also devoted a chapter to “Sustainable Development and Climate Change”. agenda

India and the SDGs:

The agenda 2030 for sustainable development with 17 Sustainable Development Goals (SDGs) and 169 associated targets comprises a complete developmental agenda integrating social, economic, and environmental dimensions. The report suggests that the country has submitted a Nationally Determined Contribution (NDC) for the developmental demands of the country to take action to fight climate changes.

In its NDC, India has to reduce the emissions intensity of its GDP to 33 to 35 percent below 2005 levels by the year 2030; achieve 40 percent of cumulative electric power installed capacity from non-fossil fuel sources by 2030, and enhance forest and tree cover to create additional carbon sink equivalent to 2.5 to 3 billion tons of carbon dioxide by 2030.

India has taken several proactive steps to mainstream the SDGs into the policies, schemes, and programs of the Government. In 2020, India’s SDG initiatives have been the 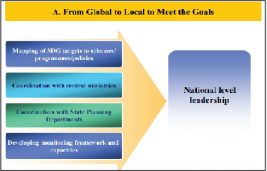 For advancing towards Agenda 2030, the localization of SDGs is crucial that involves the process of adapting, planning, implementing and monitoring the SDGs from national to local levels by relevant institutions and stakeholders. For which, the country has adopted the approach based on Centre-State collaboration.

Prominent National initiatives for SDGs and to fight Climate Changes:

The National Mission for a Green India (GIM) to e to increase forest cover on 5 million hectares of forest/non-forest land and improve the quality of forest cover.

Climate Change Action Plan (CCAP) to build and support the scientific and analytical assessment of climate change, and to establish the appropriate institutional framework and implement climate actions at a total cost of Rs. 290 crores for a duration of five years.

According to the survey report, The implementation of NDC India would need around USD 206 billion between 2015 and 2030 for implementing adaptation actions in key areas like agriculture, forestry, fisheries, infrastructure, water resources, and ecosystems. The report also says that India’s climate change actions till 2030 will require a financial resource of USD 2.5 trillion. However, an integrated approach is required to get the necessary resources essential against climate action, at the domestic and international level.

The survey report reveals that the cumulative issuance of global green bonds crossed USD 1 trillion marks in 2020 and India stood second among the world’s market of green bonds. Green bonds are debt instruments issued by an entity for raising funds from investors and the proceeds of a green bond offering are used towards financing ‘green’ projects. As of 24th December 2020, eight ESG
mutual funds have been launched in India.

International Solar Alliance (ISA) has recently launched two new initiatives – a ‘World Solar Bank’ and ‘One Sun One World One Grid Initiative’. Aiming to provide low-cost financing at favorable terms for solar energy projects, and to create an interconnected green grid that will enable solar energy generation in regions with high potential and facilitate its evacuation to demand centers, respectively.

Coalition for Disaster Resilient Infrastructure (CDRI) co-chaired by India and the United Kingdom for disaster resilience in all aspects of human activity has been unambiguously highlighted by the COVID-19 pandemic. As of December 2020, 19 countries and 4 multilateral organizations have become members of the Coalition.