India’s solar manufacturing prowess, or lack of it, has been a regular cause for concern ever since the country started powering forward in capacity additions from 2016 onwards. A new report from IEEFA and JMK Analytics puts the spotlight on the sector, especially on its failure to ramp up even as demand went up domestically. It’s an issue that deserves attention, not just because of the $2.6 billion spent on imports every year since 2015, as the report says, but also for the strategic role of the energy sector. India’s 450 GW target for 2030 entails potential imports worth $18 billion per year, say the authors, perhaps the strongest and simplest reason for the government to look beyond piecemeal approaches and consider a larger effort.

While covering the usual issues with Indian manufacturing, namely, lack of scale, being behind on the technology curve (it claims share of Mono modules is only 13 percent of total manufacturing capacity), besides a cost difference of 15 percent to 20 percent for module manufacturing using imported cells versus domestic cells, the prognosis is inevitable. To achieve a real manufacturing breakthrough in India, there will be a cost to the exchequer involved, either in terms of incentives, or tariffs that will lead to a higher power cost.

So why hasn’t anything worked so far? At any time over the past 5 years, we have had any or more incentives being used to push manufacturing, mostly with little to show in terms of results.

Be it the DCR (Domestic Content Requirement) scheme for centrally subsidized schemes, that cover rooftop solar as well as the massive PM KUSUM scheme for solar pumps and ground mounted solar in rural areas, to the CPSU scheme that was expended to target 12 GW by 2023, the government even used the hammer of safeguard duties between July 2018, to July 2020, it’s all been tried. 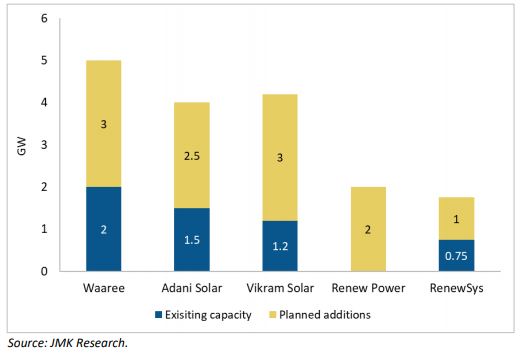 Success, where it came in the form of the production and manufacturing linked tenders that created a possibility for 3 GW of manufacturing,  (between Adani Green and Azure Power), is still floundering, as the power cost of Rs 2.92 in the tender for the 12 GW of generation has pushed away cash starved discoms.

That leaves the industry with the PLI scheme or the Production Linked Incentives Scheme, the latest effort to kickstart production. The PLI scheme  has generated more hope simply because it has delivered in the electronics sector to an extent, and for now, some of the players who might avail its benefits includes solar developers with a large enough pipeline to consume their production output for their own projects. That includes Renew power, Adani Green and even Tata Power. A clear Rs 4500 crore allocation also puts a little pressure to move fast. The PLI scheme’s success will be clear soon, with over 15 GW of manufacturing plans set to face the reality of go/no go soon across both existing manufacturers like Waaree Energies, Vikram Solar and Adani Solar, and new ones like Renew Power and Azure.

In all this, the report does make it a point to mention the Chinese approach, which has worked wonders. It has seen the Chinese solar manufacturing sector emerge as a global juggernaut, with an over 70 percent global share. That of course also means that India is hardly the only country that has found itself running on Chinese imports. Solar pioneers like Germany in the EU , and the US which invested significantly in research too, have also found it tough to protect their manufacturing champions. Even some of the largest investments in fresh manufacturing in these markets, particularly the US and South East Asia, have come from Chinese manufacturers.

Perhaps that is the reason Saibaba Vutukuri, CEO, Vikram Solar, one of the leaders in solar manufacturing , on his expectations from the coming union budget, has this rather extended wishlist. “We need a comprehensive policy framework encompassing both tariff and non-tariff barriers, long term financial support and direct incentives to make the domestic solar industry cost-competitive. The finance ministry should consider 5% Interest Subvention on term loan and working capital, upfront Central Financial Assistance of 30% on CAPEX, increase export incentive from 2% to 8% under Remission of Duties or Taxes on Export Product (RoDTEP) which will aid indigenous solar manufacturing.

Additionally, we recommend, the Government to consider implementing tariff barriers like BCD/Safeguard Duty/ADD for at least 4-5 years. Offering capital subsidy of 50% for setting up R&D and Quality testing infrastructure within the manufacturing units will help build scale. Also, Super-deductions of 200% of the R&D expenditure for new and clean solar technology development should be allowed. India already offers super-deduction of 200% of the R&D expenditure in emerging areas such as bio-technology which has led to rapid growth of Indian biotech and pharma companies.”

That’s pretty much a story of all that has already been promised, with patchy execution in most cases from the government. Even the top exporter and key manufacturing leader, Adani Solar has been in favour of incentivizing manufacturers through higher end consumer prices  for power, instead of subsidy payments through the government, mainly due to the sheer rigidity of government to deliver on time.

The Chinese approach has been to encourage firms to bet big from day 1, in terms of global scale plants, and support that with cheap money, tax benefits, and state backed firms bringing together multiple industry players to pool R&D expenses and learnings. That has created not just a world leading sector, but also a sector with some of the most ambitious expansion plans, placing sustained pressure on manufacturers hoping to grow with the sector everywhere else. In fact the Chinese majors have been so good at scaling up and moving into new markets, that in 2019, we had wondered if they would not be the best option to attract manufacturing to India . That was before the border tensions of 2020 put paid to those plans, of course.

It is interesting that the report does not touch on the issue of the issues at state discoms, which have flowed down to impact manufacturing too. Discom inability to pay on time for utility solar (Due to financial losses) , and encourage rooftop solar  (to protect turf) has been a root cause behind the failure of most of these initiatives. Power being a concurrent subject has only made it more difficult to reform the distribution sector.

Moves such as those seen by Andhra Pradesh recently to go down its own path in disregard to central norms, also indicate serious issues for the future.

In conclusion, it is clear that domestic manufacturing is no longer desirable, but an essential. But getting there requires some tough decisions, willingness to take risks, and of course, a consistent and predictable domestic demand growth that will provide domestic players the encouragement to invest. As 2020 showed us, we clearly have to make up a lot of ground in all these areas.