The electric two-wheeler market in India is expected to cross 2 million units over the next five years according to a CXO Survey by JMK Research.

The electric two-wheeler market in India is expected to cross 2 million units over the next five years according to a CXO Survey by JMK Research & Analytics. As per the “E2W CXO Survey”, most industry experts feel that the electric two-wheeler (E2W) market size is likely to cross 20 lakh units in the next 5 years in India. 60 percent of the survey respondents also predicted that the expected share of E2Ws in total two-wheeler sales in the next 5 years could vary from 6 percent to 15 percent. (The current share of E2W in total two-wheeler sales in FY2020 was about 0.7 percent). 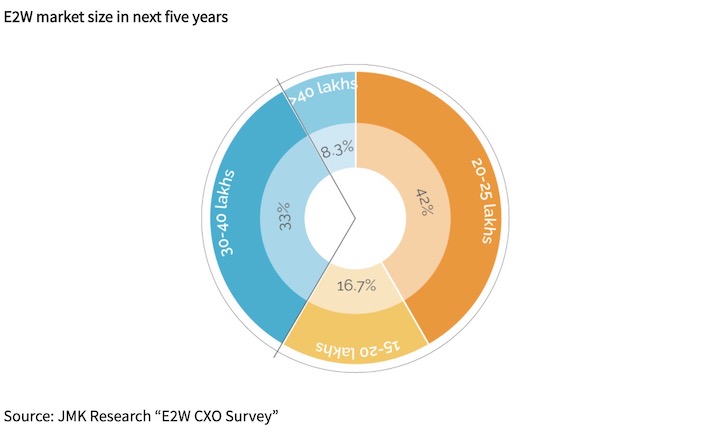 As per the survey findings, the market for high-speed E2Ws is predicted to grow by 5 times Vs. 3-fold growth for low-speed E2Ws in the next five years. According to FAME II guidelines, only those E2Ws with speed higher than 40 km/h are eligible for incentives, which is one of the imperative reasons for superior growth prospects for high-speed E2Ws. Rising consumer awareness, strong government push, and falling battery prices would favour robust growth outlook for the E2W market.

Electric Two Wheeler Sales To Grow at 87 Percent to 3.4 Million In 2025 in India
Also Read

More than 50 percent of survey respondents feel that the battery prices are expected to be below USD 100/ kWh before 2024, which is the key factor driving EV market growth. Battery constitutes about 50 percent cost of an E2W and this price is seen as the inflection point around which EVs would reach price parity with the Internal Combustion Engine (ICE) vehicles.

Despite the fact that there is a sudden disruption in the EV space this year because of the COVID-19 pandemic, 50 percent of the respondents still foresee 2-3 times growth in their business next year.

“Even though the future of the E2W industry looks optimistic, there are a few roadblocks on its path to success. High upfront costs of E2W and government incentives linked to E2W components localisation are the two main challenges for the E2W market in India. Import dependency for battery and inadequate charging infrastructure are other pressing issues in the market,” the report added. 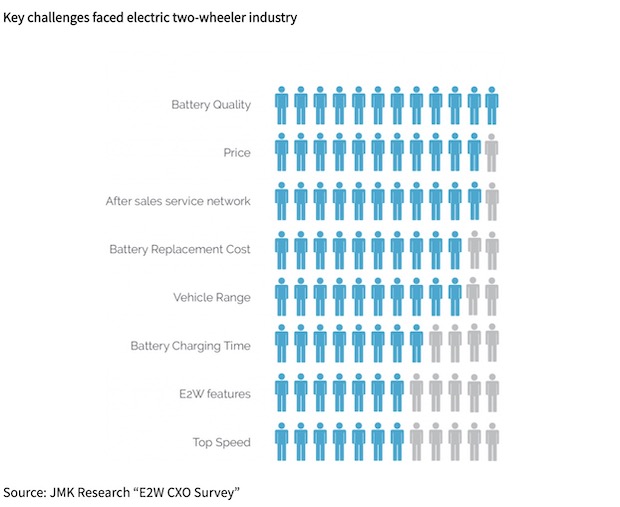 Further adding that based on the response to the survey, it could also be inferred that in order to induce stronger stimulus to further charge the market, government subsidy is highly crucial for the next 5 years. Respondents have also suggested that direct subsidies should be provided for local manufacturing of components and consumer awareness programs can be promoted by the government. To ensure complete safety in the handling of hazardous lithium-ion batteries, strict guidelines and certifications should be in place for battery pack manufacturers and transporters of such goods.