Bengaluru-headquartered electric scooter manufacturer, Ather Energy recently opened a second manufacturing plant in Hosur, Tamil Nadu. To better meet the rising demand for its flagship scooters, the Ather 450X and 450 Plus, the brand will be able to increase its production capacity to 420,000 units annually with the aid of the 300,000-square-foot facility. 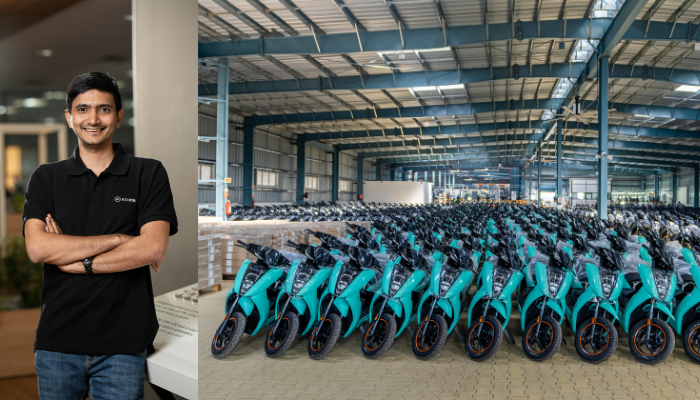 The 300,000-square-foot new manufacturing facility for Ather has two components, one for vehicle assembly and the other for battery production. There will be five assembly lines for the battery unit and two for the vehicle assembly. 420,000 units will be able to be put across the plant to accommodate the increasing demand for its scooters. In keeping with the government’s “Aatmanirbhar Bharat,” the ultramodern facility will help the nation’s domestic manufacturing sector grow. Hosur is the best location for manufacturing because of the developed local ecosystem and the fact that the majority of Ather Energy’s suppliers are in Tamil Nadu and the nearby state of Karnataka.

Ather Energy’s Co-Founder and Chief Technology Officer, Swapnil Jain said, “The new facility has been enabled with Industry 4.0 bringing together data from testing & simulation, process (Industry 4.0), and dield (connected vehicle) to deliver electric scooters with world-class quality. With a strong focus on manufacturing excellence, we have improved our takt time by 10X and work content by 4X. Towards our commitment to vehicle safety, we have class-leading testing standards for our scooters on the vehicle as well as on the software side. Currently, each scooter goes through more than 1500 stringent tests to ensure its reliability and safety.”

To spearhead the nation’s EV revolution, Ather Energy has been making progress, it says. The facility complies with all applicable manufacturing requirements while keeping in mind the sustainability of its manufacturing processes. There are no water discharges or effluents produced by the factory. Internal STP is used, and treated water is circulated to the plantation for flushing. The plant also contains an all-electric material and energy-regenerative testing units at assembly lines.

By entering new areas, Ather Energy intends to boost its retail business. By March 2023, the business hopes to have 150 Experience Centers spread throughout 100 locations. To give the riding community a well-rounded experience, it has also made significant investments in the infrastructure for charging. The company recently reached the milestone of putting in 500 fast-charging stations around the nation, and by the end of FY23, it wants to put in 1400 Ather Grids to help the EV sector flourish and make the switch to EVs easier.

Recently, Ather Energy announced the installation of the 580th public fast charging point, the Ather Grid, across 56 cities in India.