The US, the world’s largest market for recreational vehicles (RV’s) which is worth USD 26.7 billion in 2020, and expected to reach USD 35.7 billion by 2026 (Mordor Intelligence), finally has a solar powered addition too. In 2020, almost 4,30,000 of these truck sized vehicles were sold in the US. But these symbols of excess and luxury for some, finally have a redeeming feature to consider.

To address the need for power at off grid camping, California based Xponent Power is releasing the first commercially available retractable solar awning for RVs, the Xpanse Solar Awning. Deployed at the push of a button, the compact Xpanse solar awning provides shade while simultaneously generating over 1.2kW of solar power to run onboard appliances. The Xpanse solar awning is compatible with most RVs and uses high-efficiency, rigid solar panels to enable extended off-grid adventures.

“Solar is the preferred source of power for RVs, but let’s face it, roof space is limited. You’re lucky if you can fit two or three large panels on the typical recreational vehicles (RV) roof,” said Xponent Power Founder and IIT Madras alumni Rohini Raghunathan. “Our research indicates that RV owners overwhelmingly want to go boondocking more often but are fundamentally limited by access to power. With the Xpanse Solar Awning, we are enabling RV owners to generate substantial power on the go so that they can go off-grid more often.” 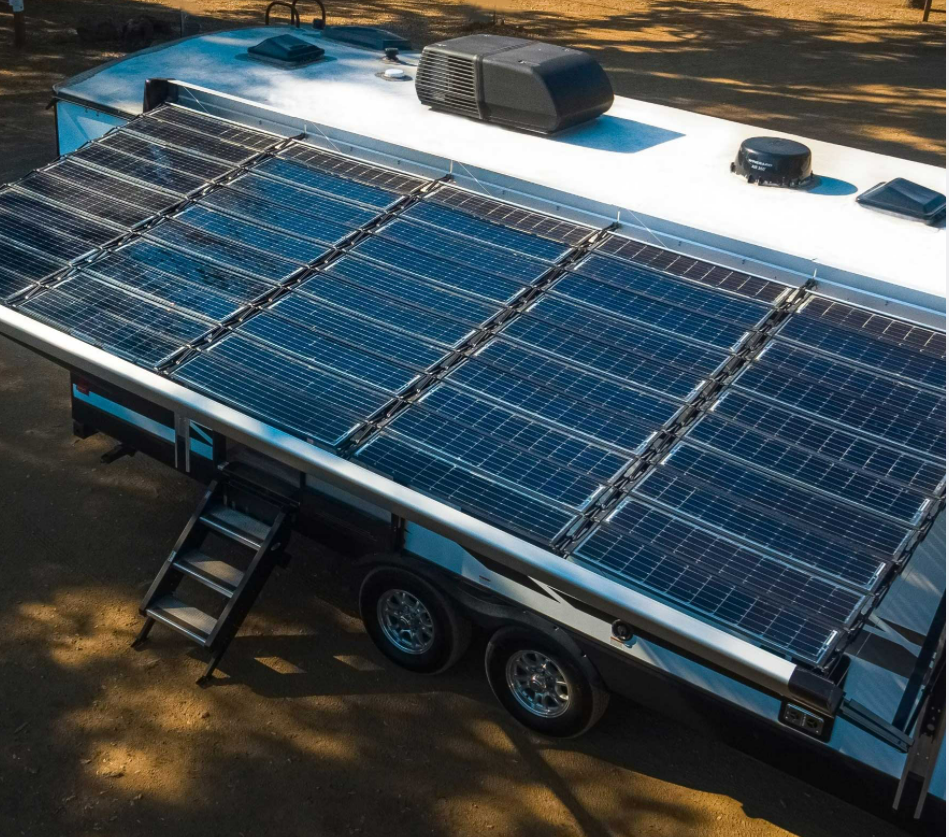 The Xpanse solar awning is compatible with electrical components used in traditional solar installations on RVs, including charge controllers, batteries, and inverters. The product, which can mount on either side of the vehicle, provides flexibility to recreational vehicles (RV) owners who would like additional power but are not looking to replace an existing awning. It can also integrate with existing rooftop installations, extending the solar power generation capabilities beyond the roof of an RV. Available at a discounted price of $7500, which can go down further to $5850 in case buyers are eligible for ITC credit, the pricey yet innovative option certainly takes solar to new places.

Designed with a strong focus on quality and performance, the awning passed a series of rigorous tests that ensured its robustness. Additionally, the awning has built-in intelligence to detect adverse weather conditions and automatically retract itself to safety when needed.

“Traditional awnings that consist of a very large continuous piece of fabric experience huge wind uplift even at rather low wind speeds, very much like a sail. In contrast, the Xpanse solar awning has an innovative, patented design that creates small gaps between the solar panels when they are slightly retracted. These gaps allow wind to pass through, greatly reducing the wind uplift and making the awning intrinsically wind-tolerant. This means the awning can be kept open and produce power even at relatively high wind speeds,” states Raghunathan. “What’s especially great about this awning design is that it uses intelligence to detect wind speeds and to provide the necessary wind relief when needed.”

The Xponent team is in talks with automotive and RV manufacturers to provide the Xpanse solar awning as a pre-installed option on their new vehicles.

“Xpanse is just the first step to creating more mobility-focused solar solutions. With this disruptive technology platform, we are transitioning solar from a traditionally static to a dynamic and intelligent system, thereby enabling widespread solar adoption in new markets,” concludes Raghunathan. “We envision the adoption of our retractable solar technology platform in several diverse markets such as mobile medical, military, police, and emergency relief power, as well as tiny homes, apartments, and more.”