Unsustainable. 128 Non-functional Solar Plants in J&K due to Callous Attitude

In a scathing indictment of the way taxpayer money is allowed to be wasted, including in renewable energy, the Comptroller and Auditor General (CAG) has highlighted the shocking state of 128 solar plants in J&K (Jammu and Kashmir). Set up at police establishments, these plants have been non-functional since 2014 due to non-settlement of payment of works contract tax, says the CAG of India in a report.

The CAG has asked the J&K Home Department to settle works contract tax (WCT) on priority and ensure rectification of defects in the non-functional plants so that the investment made is used.

CAG released a report on Social, General, Economic and Revenue Sectors for the year ended 31 March 2019, which was tabled in Parliament recently, the CAG says in that report, “non-settlement of payment of WCT with the state taxes department rendered 128 solar power plants (SPPs) installed at police establishments non-functional since September 2014 despite incurring an expenditure of Rs 9.70 crore between May 2014 to January 2015 and availability of maintenance-free warranty”. 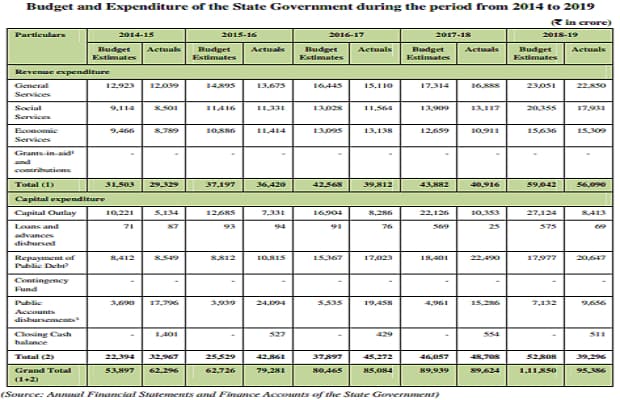 The report further said, to ensure uninterrupted power supply to police establishments, a proposal of Rs 37.94 crore to provide a solar photovoltaic system for 523 locations was submitted by the Jammu and Kashmir Police on August 25, 2011, to the government for approval and onward submission to the Union Ministry of New and Renewal Energy.

“After only two days, a reworked proposal with a total financial implication of Rs 43.31 crore was submitted (27 August 2011) including additional 25 locations (district police offices),” the report mentioned.

“The government of India, under the Central Financial Assistance (CFA) sanctioned Rs 33.54 crore in February 2012, towards the installation of 523 SPPs with an aggregate capacity of 1,408.6 KWP at the establishments of the J&K Police at a tentative cost of Rs 37.94 crore,” it added.

J&K: 4 Policies Approved including RE to Ramp Up Industrial Growth
Also Read

The contract for the supply, installation, testing, commissioning, and maintenance of SPPs of different capacities, aggregating up to 1553.76 KWP, for 562 locations was placed in March 2013 with the firm for Rs 36.14 crore because the price quoted by it was well within the approved budget of Rs 37.94 crore, the report said.

The home department stated that all the issues shall be resolved as soon as the government releases the WCT amount or waives it, the report said.

“Thus, failure of the department to effectively coordinate and settle the issue regarding payment of WCT with the sales tax department led to impounding of spare parts dispatched by the firm which resulted in non-functional SPPs,” it stated.

“As a result, the benefits of installation and commissioning of 128 SPPs could not be availed, despite an expenditure of Rs 9.70 crore having been incurred for installation of these 128 SPPs. The matter was reported to the government on May 2020, their reply is awaited (September 2020),” the CAG said.

Such instances of legendary corruption and inept coordination between departments are not surprising in the former state and now Union territory, considering the kid gloves with which the ruling political establishment there has traditionally been handled. The result has been mind-boggling corruption that has only alienated local people further from the quality of governance served up. J&K Solar Plants

Considering the vintage and costs involved, one assumes these plants are small rooftop plants, as costs were quite high till 2014, when these were set up. Perhaps one should be grateful that the full budget was never utilised, as chances are that these idle plants might be better off being junked and replaced with more modern plants now. That will hopefully be allowed to work.