U.S. commercial solar installations reached the second-largest year ever during 2019, rising by 10%  year-on-year to 1,286 Mega Watts (MW), according to a report from the Solar Energy Industries Association (SEIA), an industry body of US solar players.

The report claims that around half of all the solar corporate solar capacity that has been installed in the country came through in the last three years alone. The corporate solar development is 15 times larger today than it was a decade ago with a price decline of 30% in the last five years providing a fillip.
Across the U.S, private companies are installing solar energy systems to power their facilities, contributing to statewide clean energy goals and national efforts to address climate change. The electricity generated from the solar installations in this report offset more than 8.9 million tons of annual carbon dioxide emissions.
This is equivalent to taking 1.9 million cars off the roads or planting 147 million trees. The climate change goals have been helped by the greater availability of third party financing, which has led to a steady increase in the size of the commercial systems at 247 Kilowatts.
“As prices come down and corporations increase their renewable energy goals, we expect this growth to continue,” the SEAI said.
Phonemaker Apple topped the list for such installations for the second year in a row in 2019. With a commitment to become carbon neutral across their entire business and supply chain by 2030, the company is likely to remain among the top U.S. commercial solar users for the year.
Amazon held on to the second spot and narrowed the gap with the top spot by installing 39 MW, while Walmart jumped from the fourth to third spot. The report said that large corporates reported that the pandemic had not caused them to change or delay their renewable energy goals. 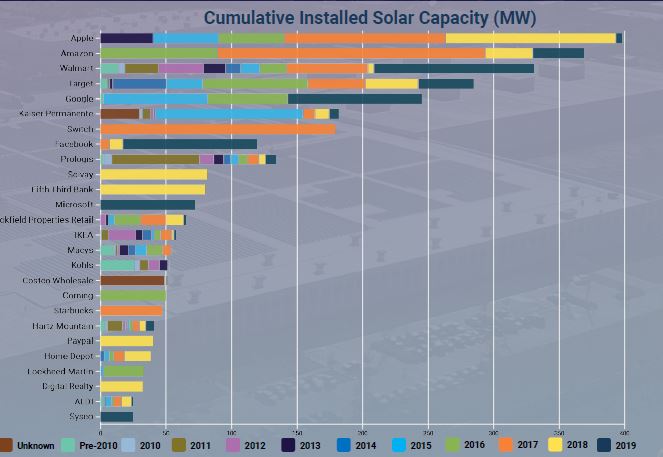 Facebook made the largest jump in rankings, moving to the ninth spot from rank 27 on the strength of a 100 MW plus installation. The Target group claimed the top spot for on site installations for the fourth year in a row by adding as much as 25.6 MW during the year.
Target and Walmart led the way for a number of individual solar installations, adding 513 and 391 systems respectively. Most of the companies that led the way for individual solar installations utilized mid-sized rooftop systems to achieve their goals.
Tags: Apple, C&I Solar, corporate solar in US, Facebook, SEIA, Solvay, US Solar
"Want to be featured here or have news to share? Write to info[at]saurenergy.com