Home » News » No way out for Stranded Thermal Assets in India, Amid RE Push : IEEFA

No way out for Stranded Thermal Assets in India, Amid RE Push : IEEFA

India’s 40 GW of stressed and stranded thermal power assets, identified by a parliamentary committee in March 2018, still linger on – most of them without any feasible resolution.

India’s 40 gigawatts (GW) of stressed and stranded thermal power assets, identified by a special parliamentary committee in March 2018, still linger on – most of them without any feasible resolution. The multitude of fundamental problems still persist despite efforts to resolve them by the government, lending institutions and proponents of the projects. These include lack of appropriate coal linkages, lack of power purchase agreements (PPAs) and capital cost overruns due to delays in acquiring land, accumulated interest funding costs and getting environmental clearances.

For example, some 24.4 GW of the total stranded capacity was fully commissioned, however, 8.2 GW of it lacked PPAs as per the committee’s report.

The IEEFA analysis finds that consecutive years of flattening power demand are extinguishing hopes that a sustained rise in power demand growth might partially revive the stranded capacity without PPAs. Also, availability of ultra-cheap renewables at sub Rs 2.5/kWh compared to coal-fired power tariffs of above Rs 4.0/kWh means that renewables are eating into the market share of coal-fired generation and going forward will serve the incremental supply requirements when electricity demand starts growing at the expected rate of 5-6 percent per annum. 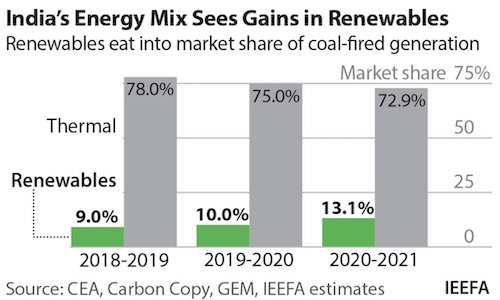 No way out for the stranded assets

The analysis goes on to add that the Reserve Bank of India (RBI) wants to push the 40 GW of non-performing assets to bankruptcy proceedings if the proponents and the lenders are unable to resolve the assets outside the National Company Law Tribunal (NCLT). Fully or partially built projects with coal linkages and PPAs have a greater chance of finding resolutions outside NCLT through strategic debt restructuring or recapitalisation from the lenders, albeit only after taking significant write-downs. However, most of the stressed projects are still not fully resolved. And some of the projects saw previously interested investors back away in 2020.

One example of which is JSW Energy recalling its bid for acquiring Ind-Barath thermal power plant (owned by Australian asset manager Macquarie Group) through the insolvency process initiated in 2019, citing the COVID-19 pandemic. The power generation infrastructure developer had agreed to pay Rs 845 crore upfront for the under-construction pithead 700 MW coal-fired power plant in Odisha. But later leveraged an ‘adverse events’ clause to pull out from the deal structured in October 2019, due to the pandemic impacting the viability of the project.

According to Global Energy Monitor’s (GEM) data no new Indian coal-fired power plants were announced in the last 12 months. Moreover, there has been no movement in the 29.3GW of pre-construction (announced + pre-permitted + permitted) project pipeline in the last 12 months. This is an indication of the lack of availability of financing for new coal-fired power projects and/or demand for additional power by discoms. The continued financial distress in India’s power distribution sector makes thermal PPAs even more unbankable absent long-delayed distribution sector reforms.

In September 2020, the Indian government-owned thermal behemoth, NTPC, announced that it will not be pursuing any new greenfield development of coal-fired power projects. Last year the states of Maharashtra and Chhattisgarh announced they will not pursue new coal-fired power project development, as did Gujarat. With the persisting structural issues in India’s coal-fired power sector there is no appetite from international or domestic investors, apart from state-owned Power Finance Corporation (PFC) and Rural Electrification Corporation (REC), to risk capital in a sector that continues to carry USD 40-60 billion of non-performing assets.

And concluded by stating that against the mounting pressure of fuel cost inflation and high capital costs of emissions control systems, expensive and inefficient coal-fired power plants will have to be retired. Moreover, partially built stressed assets will have to be written down, realising a massive loss for India of public and private capital.