The Paris agreement sets out a global framework to avoid dangerous climate change by limiting global warming to well below 2°C and pursuing efforts to limit it to 1.5°C. Today, more and more countries are aiming for net zero emissions by mid-century and attention is shifting to the implication of this objective. While existing Nationally Determined Contributions (NDCs) promise emissions reductions by 2030, they fall short by a wide margin of what is needed at a global level. Therefore, more needs to be done while the opportunity remains, writes Dolf Gielen, Director, IRENA (International Renewable Energy Agency) Innovation and Technology Center, in a timely piece.

The author says that the White House virtual summit organised by President Biden last week reflects the urgent need to determine collective actions that can accelerate results in this regard. Biden announced that the United States now aims to reduce emissions by 50-52% by 2030 compared to 2005 levels. The EU announced an emission reduction target of 55% by 2030 compared to 1990 levels, while Japan and the UK also announced new ambitious targets. These announcements create a global momentum for more action. In 2020, as part of IRENA’s Global Renewables Outlook, a 2°C Paris Agreement-compatible scenario called the Transforming Energy Scenario (TES) was developed that foresees a 70% CO2 emissions reduction by 2050. In March 2021, IRENA released a more ambitious 1.5°C scenario that envisages a continuous decline to zero CO2 emissions by 2050. 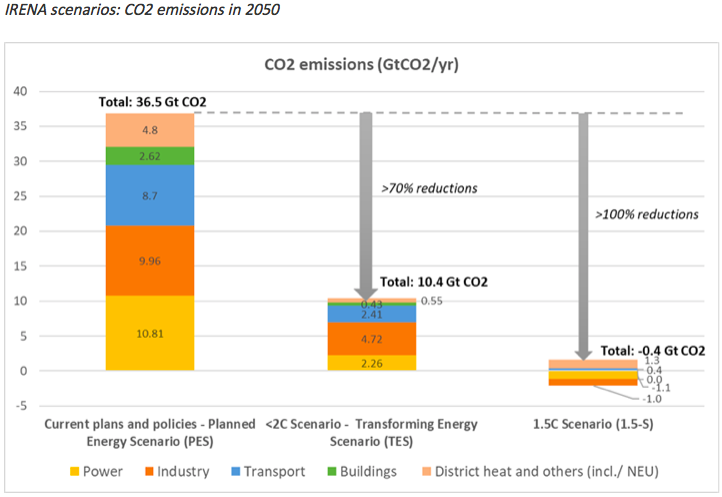 To close the emissions gap in 2050 three types of analysis were done: 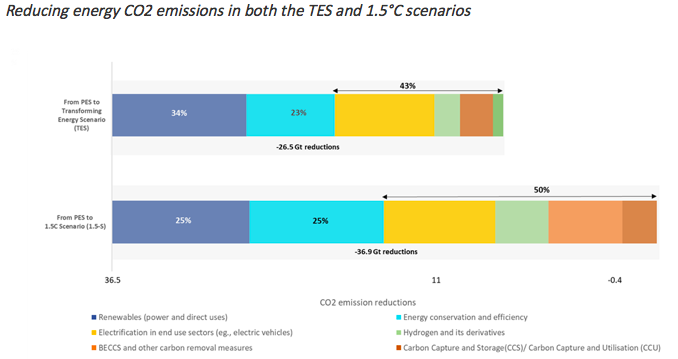 More clean hydrogen is used: total clean hydrogen production in the Transforming Energy Scenario amounts to 240 Mt and it increases to over 610 Mt in the 1.5C scenario, two thirds of which is green. This hydrogen replaces oil (e.g. as ammonia synfuel for ships and synthetic jet fuel) and it substitutes natural gas. Hydrogen based direct reduced iron production replaces around half of blast furnaces. The additional clean hydrogen equals around 2 Gt CO2 emissions reduction in 2050. More CCS technology is deployed: especially for biomass and refuse derived fuel fired cement kilns where process CO2 and biomass CO2 can be captured jointly and subsequently stored (Biomass coupled with CCS – BECCS). In addition, BECCS is applied for other processes such as power generation, firing either wood from construction and demolition waste or wood pellets. Also waste incinerators pose an interesting opportunity as the CO2 originates from a mix of kitchen waste (biomass) and plastic waste. Overall, total CCS and BECCS use would grow from around 3 Gt/yr in Transforming Energy Scenario to 7-8 Gt/yr in the 1.5C scenario, over 50% of which is BECCS. The additional CCS and BECCS use equals around 5-6 Gt CO2 additional emissions reduction.

More renewable power is deployed: While the share of renewables in Transforming Energy Scenario amounts to 86%, this share increases to 90% in the 1.5C scenario by 2050. This includes a 63% share of solar and wind power generation. Such high share of variable renewables is only feasible in combination with much higher power systems flexibility. This flexibility has to come from a combination of new technologies and infrastructure, revision of markets and regulatory frameworks, new operational practices and new business models. The greater use of renewables yields around 0.2 Gt additional CO2 emissions reduction. Part of the increase in renewable power use can also be attributed to industry relocation to places with ample availability of low-cost renewable power, for example production of direct reduced iron using green hydrogen in Australia and Brazil close to the ore mining sites. 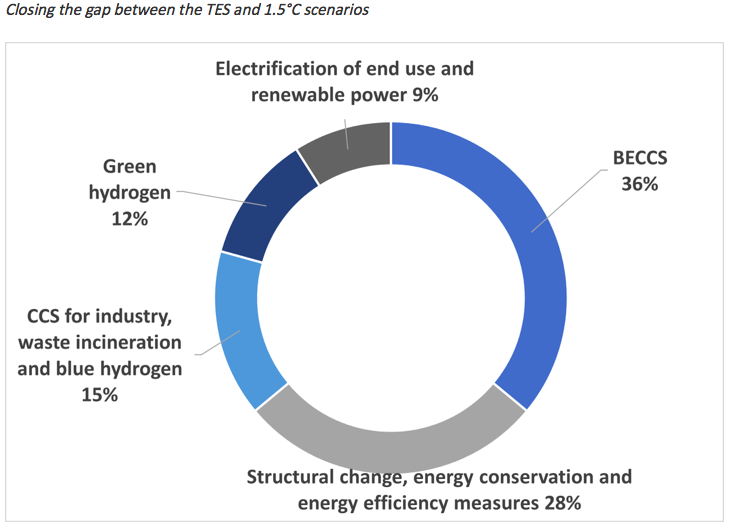 The measures presented above yield about 11 Gt additional CO2 emissions reduction which closes the gap between Transforming Energy Scenario and 1.5C scenario.

According to Gielen, the findings of IRENA’s analysis have important policy implications. The selection and focus of key strategies is largely the same in both scenarios, therefore closing the gap is a matter of pushing harder in well-known areas; i.e. decarbonising sectors in industry and transport.

Full decarbonisation of these sectors, as in the 1.5°C scenario, is challenging but feasible. However, the rate of change in the 1.5°C scenario is daunting – much of today’s energy infrastructure and capital stock will need to be replaced in the next three decades to translate this vision into a reality. Success is far from guaranteed, but this should not dissuade us from trying. Ultimately, the speed and extent of our movement in this direction will determine our progress toward the goals of the Paris Agreement. We must now capitalise on the renewed commitments by countries to push the momentum forward with immediate, collaborative and concrete actions to meet the challenge of climate change, he concludes.