The International Renewable Energy Agency has released a report including updates on renewable energy and climate change pledges after five years of the Paris Agreement.

With the adoption of the Paris Agreement on 12 December 2015, nearly all countries around the world agreed to keep the rise in the average global temperature well below 2 °C this century compared to pre-industrial levels and to try to limit the increase to 1.5 °C. Countries pledged to reduce carbon dioxide (CO2) and other greenhouse gas emissions, as well as to adapt to the impacts of climate change. By scaling up renewable energy, countries can sharply reduce one major source of the problem.

Nationally determined contributions (NDCs) are at the heart of the Paris Agreement and the achievement of these long-term goals. NDCs embody efforts by each country to reduce national emissions and adapt to the impacts of climate change. Renewable energy is a crucial component of NDCs, – the national pledges submitted under the framework of the Paris Agreement. NDCs quantify the commitment of each Party (or signatory that has ratified the agreement) to reduce carbon dioxide (CO2 ) and other greenhouse gas emissions, as well as to adapt to the impacts of climate change.

Based on new pledges submitted in 2020, IRENA concludes that a total of 190 Parties have sanctioned the Paris Agreement and 188 have submitted NDCs to the United Nations Framework Convention on Climate Change (UNFCCC). Of these, 170 NDCs mentioned renewables, while 134 included quantified renewable energy targets.

However, all 134 of those NDCs included renewable energy targets for electricity generation, only 56 included targets for direct heat and transport, even though decarbonization is key to achieving the objectives of the Paris Agreement.

The report indicates that, if all renewable power targets included in NDCs were implemented, an 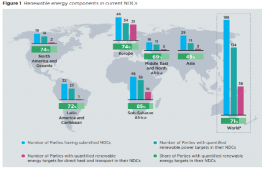 Remarkably, targets expressed in NDCs could boost the generation of renewable-based electricity rapidly by 2030.

The year 2020 marks the beginning of the formal NDC submission cycle. Amid the COVID-19 pandemic, however, many countries have missed the deadline. In 2020, only 18 countries have submitted new NDCs. Of these, ten include quantified renewable energy targets, but only five of these targets appear to be more ambitious than in the previous round of NDCs.

Also, engagement by IRENA to scale up renewables in NDCs spans 66 countries to date, with a total population of 1.3 billion people and energy-related greenhouse gas emissions approaching 3 billion tonnes of CO2 equivalent per year. These include 17 of the world’s least developed countries and 20 small islands developing states.