According to a report from Institute for Energy Economics and Financial Analysis (IEEFA), India already has 93 GW of on-grid variable renewable energy (VRE) capacity as of January 2021. Now, one of the next big challenges for India’s electricity sector is battery storage, green hydrogen, and flexible coal-fired power generation into the electricity grid i.e. renewable energy integration over the next decade.

However, there are opportunities for cross-learnings as some of the renewable energy-rich Indian states such as Rajasthan, Gujarat, Maharashtra, Karnataka, and Tamil Nadu could have renewable generation increased to 50 percent by 2030, the reports suggested.

To do such a large-scale integration, India requires policy support for a time-of-day (ToD) pricing mechanism that incentivizes investment into a multitude of technology solutions for flexible, peaking power delivery.

Also, in a recent India Energy Outlook 2021, the International Energy Agency (IEA) predicted that by 2040 India could add 900GW of renewable capacity with renewable energy becoming the dominant source of power supply in India’s electricity system.

COGOS to Deploy 1000 EVs in its Logistics Fleet, Partners With Altigreen
Also Read 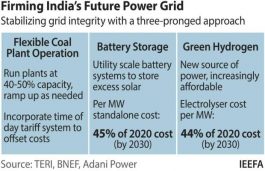 Battery Storage: The report gives the numbers regarding the cost of standalone lithium-ion battery systems globally has fallen from USD 1,100/kWh in 2010 to USD 137/kWh in 2020. BloombergNEF (BNEF) proposes a further decline in the cost to USD 58/kWh by 2030.

IEA’s India Energy Outlook 2021 foretells that India could have 140-200GW of battery storage capacity by 2040, the largest of any country.

IEEFA concludes that despite the cost sensitivity of large parts of the Indian market in the face of current high battery costs, grid-scale batteries are not a distant dream for India, particularly for the commercial and industrial, and high-end consumer segments already paying an excessive cross-subsidy.

Green hydrogen: Electrolysis of water using electricity, one of the two most common methods of hydrogen production, which is now moving towards being competitive by the end of this decade, encouraged by the growing availability of ever-cheaper VRE.

According to The Energy and Resources Institute’s (TERI) recent analysis, the cost of alkaline electrolyzers is projected to drop 56 percent from around Rs6.3crore/MW today to around Rs2.8crore/MW by 2030.

Improving efficiencies of electrolyzers will play an important role in driving the costs of green hydrogen below Rs150/kg by 2030 versus Rs300-440/kg as of today.

The report suggests that India can look to green hydrogen as a lower cost, zero pollution domestic alternative to using imported LNG. Hydrogen gas peakers might prove another key tool to managing VRE integration but again, only when supported by ToD pricing.

Flexible coal-plant operation: Coal, which is likely to be the dominant source of Indian electricity generation for some time to come, is playing a vital balancing role in integrating large-scale variable renewables.

However, the best way to capture the value of more flexibility, coal-fired plants would require retrofitting, operational and regulatory amendments.

This report has discussed the findings of a couple of pilot studies on flexible coalfired plant operation in India, optimizing sunk investments to help the transition.

According to the report, under the current structure in India, plants with the lowest variable charges get dispatched first. In IEEFA’s view, this metric going forward should evolve to a highly flexible, dynamic ToD pricing to incorporate the flexibility parameters of coal-fired power plants in support of VRE integration.

“India’s strategy should be to plan in advance and be prepared to ride the energy storage wave when it arrives,” Kashish Shah commented.