Underpinned by a global shift of regulators, investors, and consumers towards decarbonisation, Hydrogen (H2) is receiving unprecedented interest and investments. And a new report developed collaboratively by the Hydrogen Council and McKinsey & Company, has tried to provide an overview of these developments in the hydrogen ecosystem. 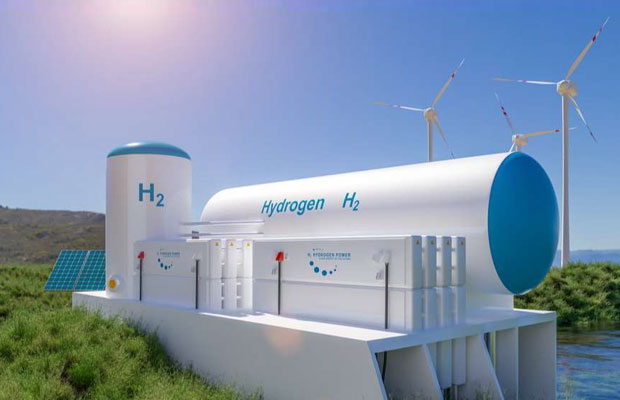 The report ‘Hydrogen Insights: A Perspective on Hydrogen Investment, Market Development and Cost Competitiveness’ starts by highlighting that at the beginning of 2021, over 30 countries have released hydrogen roadmaps, and that the industry has announced more than 200 hydrogen projects and ambitious investment plans, and governments worldwide have committed more than USD 70 billion in public funding. It finds that this momentum exists along the entire value chain and is accelerating cost reductions for hydrogen production, transmission, distribution, retail, and end applications.

Tracking deployments of hydrogen solutions, associated investments and the cost competitiveness of hydrogen technologies and end applications, the report covers –

Globally, there are 228 hydrogen projects across the value chain.

Of these, 17 are already-announced giga-scale production projects (i.e. more than 1 GW for renewable and over 200 thousand tons a year for low-carbon hydrogen), with the biggest in Europe, Australia, the Middle East and Chile. The report shows that Europe leads globally in the number of announced hydrogen projects, with Australia, Japan, Korea, China and the USA following as additional hubs. Of all announced projects, 55% are located in Europe. While Europe is home to 105 production projects, the announced projects cover the entire hydrogen value chain including midstream and downstream. 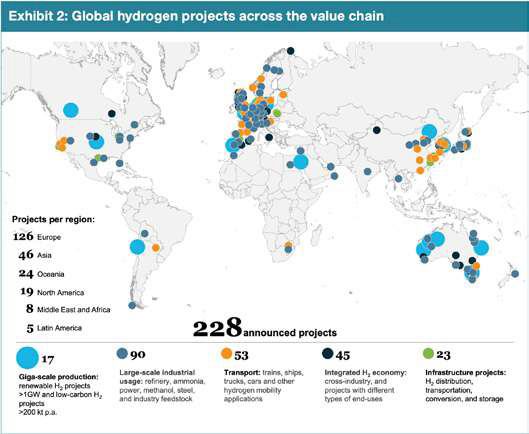 And while, in expected major demand centres like Korea, Japan (and Europe), the focus is on industrial usage and transport application projects. While Japan and Korea are strong in road transport applications, green ammonia, LH2, and LOHC projects, Europe champions multiple integrated hydrogen economy projects. These latter initiatives often feature close cross-industry and policy cooperation (e.g., the Hydrogen Valley in the Northern Netherlands).

A tally of project announcements, the report found that investments required to reach government production targets and spending projections across the value chain adds up to more than USD 300 billion through 2030. Given the industry’s early stage, the vast majority (75 percent) of these investments involve announcements but not committed funding.

To date, it estimates USD 80 billion of mature investments until 2030. These include USD 45 billion in the planning phase, which means companies are spending sizeable budgets on project development. Another USD 38 billion involves either committed projects or those under construction, commissioned or already operational.

And the largest share of investments is projected in Europe (about 45 percent), followed by Asia, where China is leading with around half of total investments.

Furthermore, looking across the value chain, the production of hydrogen accounts for the largest share of investments. Endapplication investments have a higher share in mature projects due to funding for fuel cells and on-road vehicle platforms.

“We are seeing a new level of maturity for the hydrogen industry, and this is only set to accelerate. Hydrogen Council members collectively are planning a sixfold increase in total hydrogen investments through 2025 and a 16-fold increase through 2030. The plan is to direct most of this investment toward capital expenditures, while collaborations, consolidations and innovation will also be a key focus,” said Daryl Wilson, Executive Director of the Hydrogen Council.

Stemming from the global shift to decarbonisation, Governments around the world have plans to support strategies to transition to hydrogen, with USD 70 billion in play.

The report finds that Hydrogen is a crucial element in most strategies to achieve net zero standing, and more countries are developing hydrogen plans. In fact, over 30 countries have created such strategies on a national level, and a further six are drafting them. Besides the national hydrogen roadmaps, sector-level regulation and targets underpin the shift to hydrogen. In transport, more than 20 countries have announced sales bans on ICE vehicles before 2035. 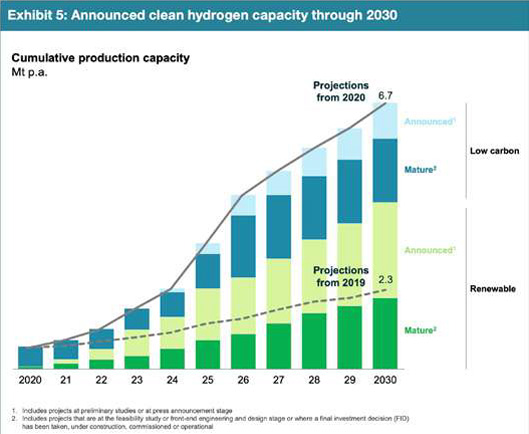 Three factors are driving this acceleration.

First, capex requirements are dropping. The authors expect a significant electrolyzer capex decline by 2030 – to about USD 200- 250/kW at the system-level (including electrolyzer stack, voltage supply and rectifier, drying/purification and compression to 30 bar). 30-50 percent lower than previously anticipated.

Second, the levelised cost of energy (LCOE) is declining. Ongoing reductions in renewables cost to levels as much as 15 percent lower than previously expected result from the deployment of at-scale renewables, especially in regions with high solar irradiation (where renewables auctions continue to break record lows). 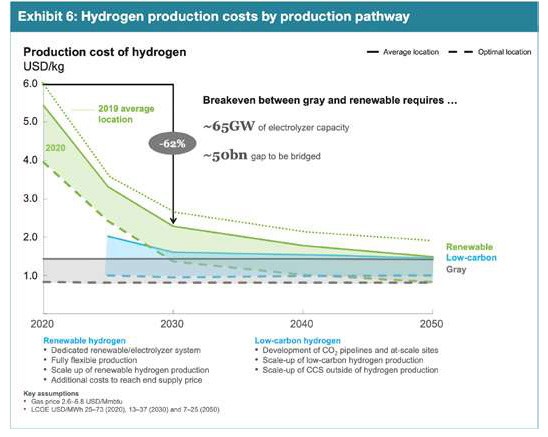 Furthermore, the report finds that including carbon costs for emissions related to gray and low-carbon hydrogen production greatly influences the breakeven dynamics between gray and renewable hydrogen. Assuming a carbon cost of about USD 50 per ton of CO2e by 2030, USD 150 per ton CO2e by 2040, and USD 300 per ton CO2e by 2050, can bring the earliest breakeven for renewable hydrogen forward to a 2028 to 2034 timeframe. However, the exact year will depend on the availability of local resources.

Detailing how in countries with optimal renewables but average cost natural gas (e.g., Chile) breakeven could occur as soon as 2028. In locations with average resources for both pathways (e.g., Germany), breakeven could come by 2032. At the same time, locations with abundant and optimal resources for both pathways (e.g., selected regions in the US) could see the breakeven of gray and renewable hydrogen by 2034. Low-carbon hydrogen could breakeven with gray by 2025-2030, subject to at-scale CO2 storage and transport infrastructure, and an expected cost of about USD 35-50 per ton CO2e.

The report then goes on detail how with hydrogen production costs falling, costs for hydrogen distribution are becoming increasingly more important. For production and distribution, three types of value chains are emerging. Large- scale hydrogen offtakers that are in close proximity to favourable renewables or gas and carbon storage sites will use onsite production. Smaller offtakers, for example refueling stations or households, will require regional distribution. In regions without optimal resources, both large- and small offtakers may rely on hydrogen imports.

The emergence of international distribution is driven by cost differences for hydrogen production stemming from renewables endowment, the availability of natural gas and carbon storage sites, existing infrastructure and the ease and time requirements for its build-out, land use constraints, and the assignment of local renewables capacity for direct electrification. Many expected hydrogen demand centres, including Europe, Korea, Japan, and parts of China, experience such constraints. In some of these cases, H2 suppliers will meet this demand more effectively by importing hydrogen rather than producing it locally. 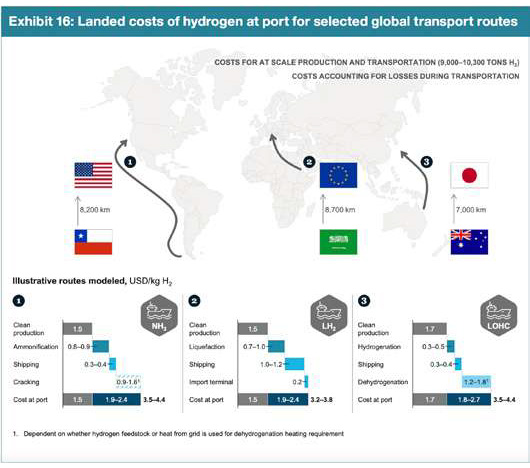 The report finds that by 2030, assuming that at-scale production and transportation infrastructure, hydrogen could be shipped from locations such as Australia, Chile or Middle East to projected demand centres at costs of USD 2-3/kg of hydrogen. This cost, coupled with very low hydrogen production costs, will unlock demand in many key sectors (e.g., in transportation, industry, feedstock and others) at the point of usage.

The updated cost outlook shows that 22 hydrogen applications can be the most competitive low carbon solutions from a total cost of ownership perspective (including hydrogen production, distribution and retail costs). In addition to the applications that were previously competitive, including commercial vehicles, trains, long-range transport applications and boilers, the improved outlook adds fertiliser, refinery, steel, aviation, and shipping applications. 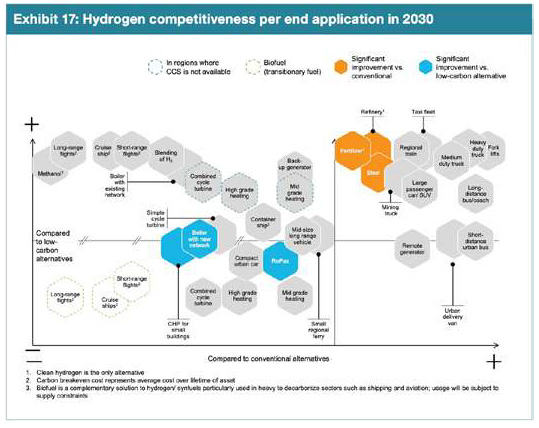 While this analysis focuses on the cost competitiveness of the enduse applications, other factors also drive the purchase decisions of companies and customers. Some of these include government targets, energy security, lower uncertainty regarding future energy costs, the premium placed by customers on carbon-free solutions, and investor preferences for ESG-compliant business models. For example, aviation, cruise ships, container shipping and steel are experiencing a push toward a greener restart post-COVID-19 from both customers and governments.

The report then goes on to detail that:

At a hydrogen production cost of USD 1.6-2.3/kg, most road transportation applications and hydrogen feedstock for industry are “in the money”. With hydrogen costs between the blue and green hydrogen cost targets for 2030 and without any costs for carbon emissions, hydrogen is only competitive in heavier road transportation applications (not including passenger cars). A cost of carbon at USD 100/t of CO2e could push industry feedstocks for applications like steel, ammonia, and refining to breakeven and beyond. Other forms of transportation like shipping or aviation only break even at higher costs of carbon (> USD 70/tCo2e) but require hydrogen-based fuels as the only zero-carbon fuel possibility that can realize decarbonisation ambitions.

And while end applications in buildings and power require an even higher carbon (~200 USD/t CO2e) price to become cost competitive, we believe they will see strong momentum, nevertheless. For example, in the United Kingdom multiple landmark projects are blending hydrogen into natural gas grids for residential heating. They are also working with hydrogen for backup power solutions, especially for high power applications like data centres. The reason for this is that while hydrogen may not be able to out compete conventional solutions, it can be the most cost-effective low-carbon option for many stationary use cases. 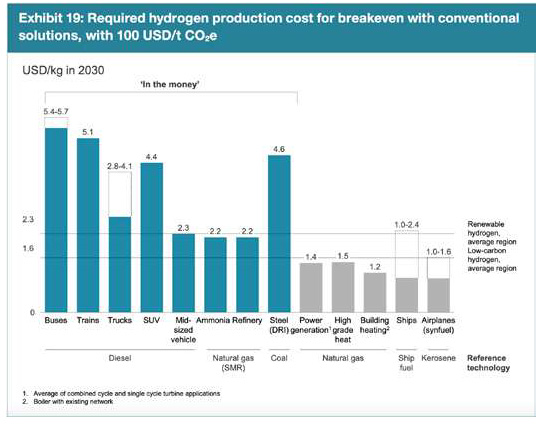 The report concludes by stating that the strong commitment to deep decarbonisation by governments worldwide has triggered an unprecedented wave of momentum in the hydrogen industry. Financial support, regulation and clear hydrogen strategies and targets in combination with the USD 70 billion committed public funds by governments to support the hydrogen transition have caused value chains to scale up, costs to come down and investments to climb to new heights. The next chapter in the hydrogen story now requires stakeholders to translate their ambitious strategies into concrete measures. The authors believe that to get things started, strategies should aim at the critical unlocks, like reducing the cost of hydrogen production and distribution. The report estimates that roughly 65 GW of electrolysis are required to bring costs down to a breakeven with gray hydrogen. This equals a funding gap of about USD 50 billion. One place to support deployment is the development of clusters with largescale hydrogen offtakers at their core. These will drive scale through the equipment value chain and reduce the costs of hydrogen production. By combining multiple offtakers, players can share investments and risks and begin to establish positively reinforcing collaborative loops. Other smaller hydrogen offtakers in the vicinity of such clusters can then piggy-back on the lower-cost hydrogen supply, making their operations breakeven faster.

The report states that the next few years will be decisive for the development of the hydrogen ecosystem, for achieving the energy transition and for attaining the decarbonisation objective. As this report shows, progress over the past year has been impressive, with unprecedented momentum. But much lies ahead. The companies in the Hydrogen Council are committed to deploying hydrogen as a critical part of the solution to the climate challenge and Hydrogen Insights will provide a regularly updated, objective and global perspective on the progress achieved and the challenges ahead.