Import of solar cells, modules increases by more than three times in India 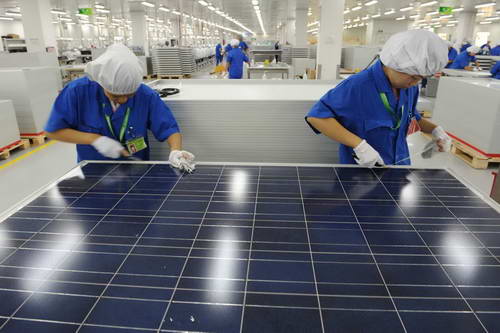 Imports of solar cells and modules have increased by over three times from Rs 5,051 crore in 2014-15 to Rs 15,523 crore in 2015-16. The solar industry in India is certainly having good times as the installations soar and investment increases.

Early this year in April the import of solar modules and cell stood at Rs.936 crore said the New and Renewable Energy Minister Piyush Goyal in a written reply to the Rajya Sabha.

This increase in Imports of solar cells and modules come as no surprise to onlookers, as Modi government made commendable pledge of installing 100 GW of PV by 2022. However, the country still depends on Manufacturers from the US, China and other countries to complete the installations in an economically viable manner.

Speaking on not imposing anti-dumping duty on such countries, the minister said: “Indian manufacturers gave in writing that they are not interested in continuing with the anti-dumping petition.”

While the government is concerned about domestic manufacturers, it is also worried about the price of power which has to be borne by common users, explained Goyal.

The minister said that the government is providing support to domestic manufacturers through a provision of reserving some capacities for domestic cells and modules, which gives assured market to them.

The government has set a target of increasing solar power generation to 1 lakh mega watt by 2022 from 20,000 mw.

Tags: 523 crore in 2015-16 from Rs 5, Imports of solar cells and modules are on the rise by over three times to Rs 15
"Want to be featured here or have news to share? Write to info[at]saurenergy.com