Nowadays, in such cases where farmers are still out of the reach of the electrical grid and don’t have proper irrigation facility, the adoption of solar via innovative ways has helped them in fulfilling their irrigation needs.

Solar has been adopted in rural areas in the country at a rapid pace on the back of subsidies offered by the government.

These off-grid measures helped the government in promoting the wide-scale adoption of solar pumping systems by farmers for their agricultural use.

However, still, there’re many farmers in the country who haven’t bought irrigation pumps due to many reasons such as – solar pumping systems are quite expensive without subsidy for average farmers; unaware about government schemes; pending subsidy applications; many farming methods doesn’t require daily irrigation etc. 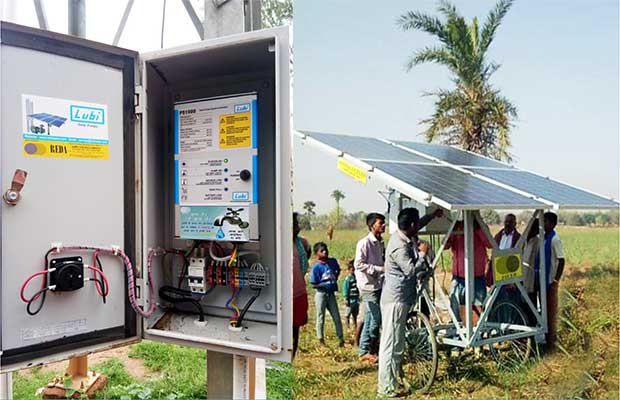 Nowadays, in such cases where farmers are still out of the reach of the electrical grid and don’t have proper irrigation facility, the adoption of solar via innovative ways has helped them in fulfilling their irrigation needs.

Here’s how an innovative idea of a mobile solar pumping system has been revolutionizing Indian farming:

An entrepreneur named Diwakar, in the state of Jharkhand, has come up with an innovative idea of renting solar pumping system to farmers.

This rentable mobile solar pumping system has resulted in the distribution of costs, making it more affordable for the farmers to avail water from nearby water sources or bores.

He has taken this concept from the concept of rented DG pump set prevalent from long time in rural India, wherein farmers use rented DG operated pump sets to pump water as and when required.

The modeling of the concept around the solar system helped farmers in availing similar benefits, at a lesser cost and in a sustainable way.

One of the biggest benefits of using this mobile solar pumping system is that, in case of vegetable farming, multiple farmers can utilize it at the same time.

According to Diwakar, “The key components of the solar pump system being from the same manufacturer allow a single service point thus reducing the system downtime in case of problems.”

“The affordability and consistency of the system also resulted in rampant adoption,” he further said.

Diwakar further added that, “Besides, so many benefits this mobile solar system also served as a mobile marketing wagon of a solar system allowing farmers to have a first-hand experience of solar systems and thus promoting its usage.”