A research report from Rystad Energy lays bare the failure of US efforts to reduce dependence on Solar Imports, especially by curbing imports from China.

According to the report, the US is on track to import a record 27.8 gigawatts (GW) of solar PV panels in 2021 from a range of countries, up from 26.7 GW last year. If recent import trends continue, solar PV imports for 2021 will be worth $8.9 billion in total, a marginal increase from the 2020 total of $8.7 billion, which was also a new record at the time.

The Chinese dominance of the US and most global markets for that matter, has been well documented, fed by a combination of domestic subsidies for Chinese manufacturers, low margins on sales and restrictions on imports. 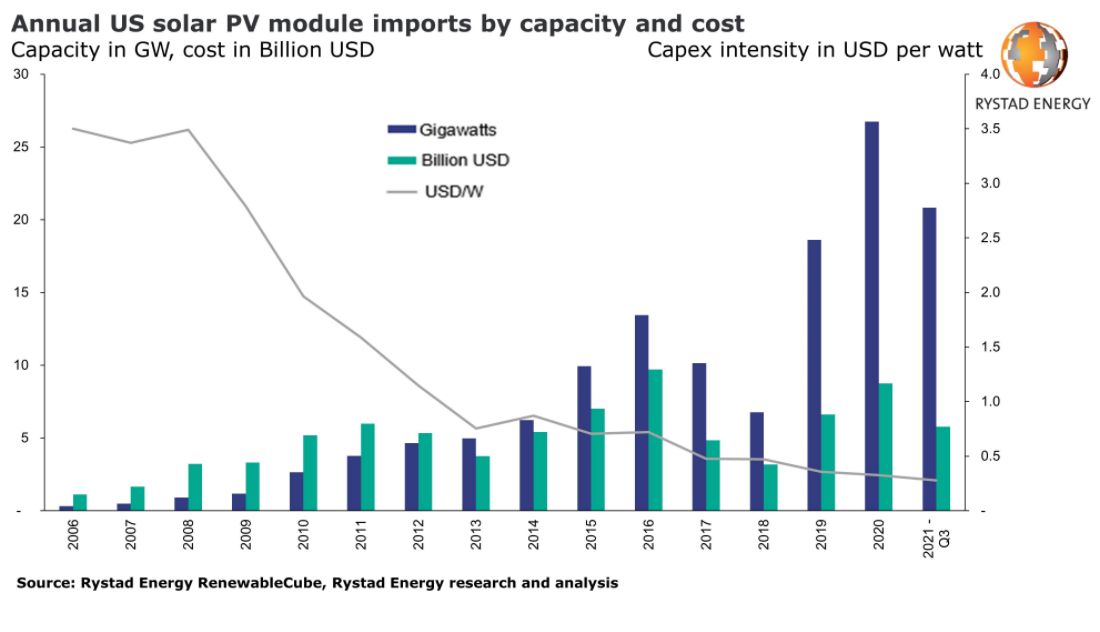 While tariffs reduced Chinese imports, demand was simply met from other sources, rather than domestic manufacturing in the US.  In 2021, US-manufactured solar PV modules are projected to total 5.2 GW, compared with the 27.8 GW expected from imports. Of this 5.2 GW, around half will come from thin-film panel manufacturing, primarily by First Solar, the world leader in thin-film production. The other half is the more widely used imported composite silicon (cSi) panels, although the projected 2.5 GW represents a mere 50% of total US manufacturing capacity.

Filling the China vacuum was Malaysia, which became the market leader in 2020, capturing 42% of the US import market share, followed by Vietnam with 38%. In 2021 to date, these countries account for 31% and 28.8% respectively, with Thailand in third place at 26.2%. Interestingly, a lot of these new imports from South East Asia are also from Chinese owned plants. The decrease in market share for Malaysia and Vietnam illustrates a rise in imports from other nations, including Thailand and South Korea and even India. Only 1% of 2021 year-to-date imports come from regions outside of Asia. A recent move to target key South East Asian countries has been held in abeyance so far.

In 2018, the Trump administration doubled down on attempts to foster a domestic supply chain for solar PV panels, enacting Section 201 tariffs on imported cSi. The policy heavily impacted PV imports and capacity installations in 2018, lowering imports to 6.8 GW, down 66.7% from the 10.2 GW imported in 2017. However, the industry bounced back in 2019 and 2020 thanks in part to a temporary tariff exemption and the scheduled phasing down of tariffs.

Despite the US’ cSi PV module manufacturing capacity of 5.5 GW per year, this capacity is exclusively module assembly and relies on imported PV cells produced overseas. Asia is the PV cell market leader, with 52% of US imports of solar cells so far this year coming from South Korea, 25% from Malaysia and 15% from Thailand. The US is set to import a record volume of PV cells in 2021, with 3 GW expected by the end of the year, eclipsing the 2.5 GW imported in 2019.

This suggests that while US domestic module assembly capabilities are ramping up, current import levels indicate a meager 50.8% manufacturing capacity utilization rate without accounting for any domestic PV cell production.

Rystad claims that China now holds 97% and 79% of all silicon wafer and cell production, respectively, which indicates that practically no US-produced silicon makes it back into a PV cell or module.

The US experience points to some sobering lessons for India, lessons the country seems to have learnt well enough so far. Manufacturing capacity in India is set to cross the 15 GW mark in 2022, with a significant ramp up in cell manufacturing too. The big challenge, polysilicon and wafer manufacturing is being targeted by majors like Reliance Industries, which lends itself to some optimism that even here, the country would finally have a manufacturing base by 2024.