Globally, over 100 GW of PV capacity was installed in 2018, with China continuing to take the lead, as it added 45 GW of capacities during the year. Other countries to install large solar capacities included Europe, the U.S. and India. China is also the world’s largest producer of solar cell/module, followed by Malaysia and Taiwan. Countries across the globe have provided strategic support to solar energy, also supporting solar manufacturing. Government subsidies/incentives have been the key reason behind the formation of large manufacturing bases globally. 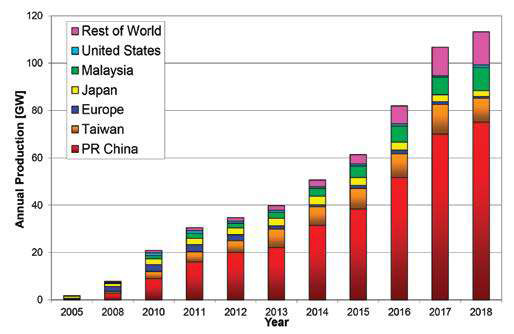 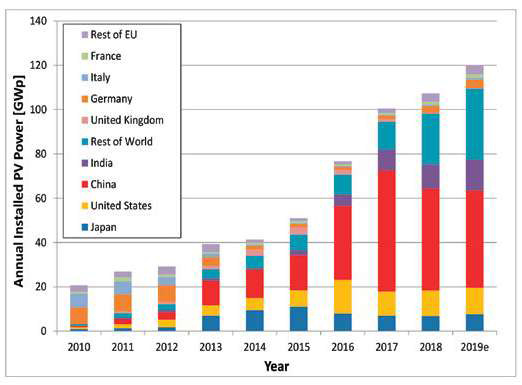 India’s commitment to reduce carbon emissions signed under the Paris Climate Change Agreement resulted in it embarking on an ambitious program of installing 175 GW of renewable capacities by 2022, of which 100 GW would be solar.

Driven by the thrust towards renewables, India’s solar capacities have grown almost tenfold from about 3 GW in FY14 to about 29 GW currently. The domestic solar manufacturers, however, have not been able to tap this growing market for solar energy. Solar manufacturing capacity did not keep pace with the solar generation capacity in India, while imports have steadily risen with increased capacity addition over the years. 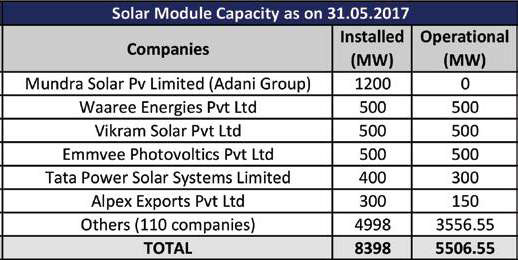 As per the MNRE’s list of cell and module manufacturers in India as on 31st May 2017, the domestic manufacturing industry has a limited capacity of about 3GW for solar PV cells and around 8 GW for solar PV modules. However, based on the latest information provided by MNRE on 5th March 2019, domestic manufacturing capacities of solar cells and modules stand at about 3GW and 10GW respectively. 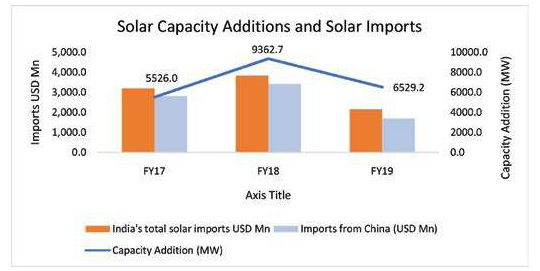 The existing scenario in FY19 depicts India’s high import dependency and the opportunity loss of Indian solar manufacturers. A simple back of the envelope calculation shows the following:

In the above table, corresponding to 6.5 GW capacity installed in FY19, the maximum supply of domestic cells and modules would be worth USD 1893 Mn. This is an opportunity loss of business to the domestic industry as more than 90 percent is supplied by foreign players. This loss of business opportunity can only balloon as capacity additions grow. 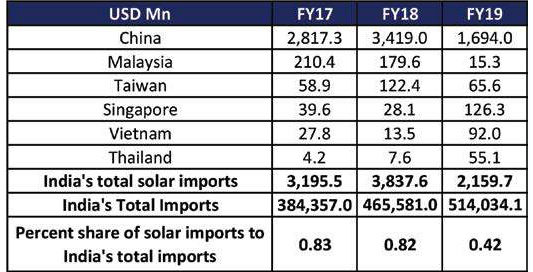 China has been the major source of India’s solar imports, followed by other South-East Asian countries like Malaysia and Vietnam. To protect the domestic solar manufacturing industry that was flooded with cheap imports, the government imposed safeguard duty of 25 percent in July 2018 (for a period of one year and later to be scaled down to 20 percent and 15 percent for the first six months and remaining six months of the second year respectively) on imports from China and Malaysia, while the same was not applicable on import of such products from other countries. The safeguard duty though helped bring down imports from China and Malaysia, but those from other SE Asian countries like Singapore, Vietnam and Thailand increased. It’s clear that India is a key market for global manufacturers, and they will try to remain competitive, making local manufacturers unviable. The challenge is therefore much bigger to make the ‘Make in India’ dream possible.

The basic reason behind high import dependence is the cost differential between the domestic and imported solar modules. Chinese solar modules before the imposition of safeguard duty were 15-20 percent cheaper than the domestically manufactured cells.

The approximate total import bill for cells and modules assuming a modest 10 GW peryear would be USD 3 billion per year. Post SGD imposition in July’18, the landed cost of Chinese modules increased, serving the purpose for domestic manufacturers. As per BNEF estimates, the domestic project developers were estimated to pay $0.34/W instead of $0.27/W for modules imported from China in August’18. However, with progressive decline in safeguard duty and aggressive pricing adopted by Chinese manufacturers considering China’s decision to curb annual solar installations, the price difference is expected to narrow down. This is, therefore, temporary relief to the domestic manufacturers, unless other measures like anti-dumping are established.

The various reasons behind such a cost structure of the Chinese solar PV include:

Similar favourable conditions for domestic solar manufacturers in India has not been available. There is a lack of economies of scale, while R&D investment has been insufficient

– India’s investments in technological know-how remain low compared to other developed nations and China. China’s 39,784 patents in solar technologies are far higher than India’s 246 and there is lack of domestically available raw materials- the manufacturing process of solar cell/module starts from silicon-polysilicon-ingots-wafers-cells-module. India currently produces only cells and modules with imported material.

Domestic content requirement– Some support was given to the domestic industry by mandating DCR (domestic content requirement) for selected solar projects, but this was struck down by WTO on grounds that DCR violated global trade rules. DCR mandated projects by public sector entities for government procurement however are WTO compliant. Recently, NTPC issued an EPC tender for 1GW solar project under the CPSU scheme, requiring only domestically manufactured cells and modules to be used for the project.

Safeguard duty– In order to protect the domestic manufacturers from cheap imports, the government imposed 25 percent safeguard duty on solar panel imports from countries like China and Malaysia, which would scale down to 20 percent to 15 percent in a span of two years, not giving enough time for domestic manufacturers to increase their capacities.

Manufacturing linked solar tender– The government also tendered manufacturing linked solar projects which either faced extensions or got cancelled due to lukewarm response from the developers on account of the capping of tariff at lower levels and shorter duration offtake, that possessed its risks. Also, raw materials for solar manufacturing are under ADD (anti-dumping duty), like glass and EVA, but the module can be imported with no ADD.

If India were to achieve even 50 percent of its total solar potential (650 to 750 GW) in the next 15-20 years, there is a huge opportunity for policy intervention in India. Even assuming only 200 GW of capacity addition in the next 15-20 years, India can promote its domestic manufacturing industry which in turn will result in employment generation and foreign exchange savings of over 50-60 bn USD.

In summary, the following benefits can be visualized:

1. A 20 GW domestic capacity per annum will spawn a plethora of employment opportunities

These benefits exclude obvious savings on freight/handling & more importantly the ability to service the solar plants with spares during the plant life. Insurance products covering performance/damages will also improve if good local manufacturing firms are the suppliers. There is, therefore, a case for re-examining the significant opportunity in domestic solar manufacturing. There may be challenges due to political pressures that could emerge from the U.S. and China on protectionist grounds. There will be a need for a pragmatic and smart economic, political and legal strategy to build and nurture a vibrant solar sector in India.
Some of the recommendations are: