When it comes to renewable projects in India, one of most critical yet underestimated aspects remains land acquisition. Always a sensitive issue in the country, land acquisition for renewable projects can be a really tricky issue for many developers, leading to long, and expensive  project delays. While local land aggregation firms and individuals have always operated, Datta Infra is one of the earliest attempts to bring it all under a professional, organised front.

Varchasvi Gagal is the Chief Executive Officer & Managing Director of Datta Infra, a unit of Datta Business Consultants Pvt. Ltd., one of the leading land aggregator and land development players in India . A graduate in Law from O.P. Jindal Global University in 2016, Gagal, before he took over the reins of Datta Infra, also founded India’s first do-it-yourself document drafting platform, Legal Spell with a vision to revolutionize the way document drafting is done in India. Dutta Infra currently counts Tata Power, SunSource Energy, Mount Litera Zee School, and indirectly, major Government PSUs including Kerala State Electricity Board, and NTPC among its clients. We caufht up with him to understand more about this crucial aspect of the renewables business.

Q. Rules and policies with respect to land acquisition and aggregation have changed frequently. Is that a key reason why you chose to get into the business?

Varchasvi Gagal: Coming from a legal background, I was aware of the risks associated with land and how every industry faces difficulties in establishing the foundations of large projects. It all starts with the land, and there is a significant variation in land laws across states, necessitating a smooth machinery to assist these large houses. We have seen challenges such as SC laws on land transfer for solar projects, ceiling limits, environmental clearances, GIB issues, and ownership and sale challenges in government allotments. We want to reward investment firms for their faith in the Indian economy by providing a safe haven for the development of these assets.

Q. Who are the other key players you compete with? How much of the market is with organized players like Datta Infra? 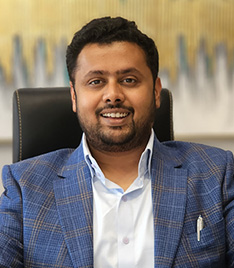 Varchasvi Gagal: Datta Infra has no direct competitor in the market currently. We are a one-of-a-kind company that provides an organized and sustainable solution for land consolidation to the renewable energy players in the market.

Q. Considering renewable projects are exempt from environmental and pollution clearances, what services do you provide there?

Varchasvi Gagal: Datta Infra aims to provide policies as well as the necessary permissions in accordance with local laws affecting the site. For all of our clients, we also obtain land records dating back to thirty years, as well as agricultural, revenue, and title searches for lands for sale. We are well-versed in the land allotment laws of several states. We are a one-stop solution in India for Land Infrastructure Development, Transmission Connectivity Solutions, Land Aggregation, and Solar Power, in addition to land aggregation and development.

Q. When it comes to land, what are the pitfalls developers underestimate? We have regularly seen acquisition linked issues as the key reasons for project delays, for instance?

Varchasvi Gagal: Land is governed not only by ownership but also by the nature of ownership on record and on the ground. There are cases of Gair Khatedari and khatedari rights prevalent throughout the state of Rajasthan, which means that in case of gair khatedari, land has been allotted but the rights pertaining to khatedari (utilization) of the land are not with the owner. Hence in such cases the sale deeds/lease deeds cannot be taken up for such lands until or unless you apply to the relevant government department and obtain khatedari orders for the same. Encroachment and village overlapping issues, as well as effective land demarcation for land possession, continue to be difficult battles for developers. Local political rivalries and the involvement of such groups impose significant costs on developers.

Obtaining the right of way (ROW) for the transmission line is one of the biggest challenges faced by every developer. A 20-kilometer power line of 440 kva requires at least 67-70 towers, which, when combined with the required approvals from various government and related agencies, as well as local body authorities, creates an even greater challenge. Another significant issue that arises during land acquisition is determining the nature of land ownership and revenue laws governing the ownership of such land for example a village is generally deemed to be under revenue when the records are governed by regular jamabandis posted at the land revenue website while there are other villages who are under colonization and record is only maintained by colonization department which currently has no online presence. The Colonization department has its own set of permissions and regulations which requires advanced legal title search reports and licensing requirements.

When a site is shared by multiple villages then possession of land is also governed by different local patwari and overlapping of land might become a serious issue to deal with in such cases. The overlap is caused by the constant redrawing of village boundaries combined with non-digitized property paper records. To reach an amicable solution between villages, a team of all patwaris assembled under the command of the district collector is required to ensure that the land quantum registered is correct and easily accessible. There are many layers involved, including dealing with the local tehsildar, sub-divisional magistrate, and local patwari, all of whom must be involved in order for the land demarcation process to be completed effectively.

Q. How could the land acquisition process be made simpler and faster, in your view?

Land registration was changed between multiple tehsils in the last sixty years attracting a lot of conflicts between past sale deeds and title clearances. A unique software with an interactive AI can enable substation support in clearing such issues. Problems like GIB, Colonization, IGNP, Forest, Environment, PACL and others must be effectively clubbed in such software for transparency and confidence of investors. We are currently working towards a similar software and also plotting land banks pan India by derisking asset buying complications.

Q. In the experience of Datta Infra, how do you rate states for difficulty levels when it comes to land aggregation and acquisition?

Q. How do land acquisition costs vary across states? Is there a benchmark cost per acre large developers look at while making bids? How do you see this market and prices evolving as India seeks a far higher solar target by 2020?

The cost of land varies by square foot and is largely determined by its connectivity, neighbourhood, resource, density, environment, facilities, and natural features. There is no set price for land across states, but energy generation is important to developers because it helps them generate revenue. The sooner you secure land and commission your project, the sooner you can begin billing DISCOMS. The cost of land, which accounts for 5-7 percent of the total project cost, is directly related to transmission line distance, unit losses, and soil quality which sets the threshold for the total cost of the project. The cost of PV modules and structures are the only price variables that are unaffected by land. However, transmission line losses, cost per tower, total perimeter, depth per pile, fencing costs, water resource availability, and accessibility to the land are just a few of the factors that play a role in determining the cost of land versus project cost.

Q. With a 300 GW target just for solar by 2030, India will need almost 1.5 million acres just for solar projects by 2030. Do you think the land for these projects is available at competitive rates?

Varchasvi Gagal: Land prices in Rajasthan and Andhra Pradesh have skyrocketed in the last two years, as well as the leasing market. Land is available in states such as Tamil Nadu, Andhra Pradesh, Madhya Pradesh, Rajasthan, and Gujarat, but there is still a huge gap between the cost of land and the cost of the project. The cost of land is less than 6% of the total project cost. A land with good soil condition can save developers cost per pile. A land with a perfect shape and fewer approach roads can have a significant impact on the cost of fencing, PV layout, and cabling. Lastly,  land that is closer to an evacuating STU/CTU will significantly decrease the cost of transmission lines and losses per unit.

The cost of land is not a problem, but a well-engineered site with thorough legal checks will always help to reduce project costs.

Varchasvi Gagal: India has become a market leader in the solar market, and our Hon’ble Prime Minister is the face of this transformation. With giant corporates like Blackstone, NTPC, SJVN, SB Energy, Adani, Reliance, Tata Power, L&T, Sterling and Wilson, Sembcorp, Greenko, Azure, Avaada, and many more are aggressively coming up as solar developers, module manufacturers, and EPC players. This is a direct implication of our government’s push through various PLI schemes, custom duty implications, and electric vehicles and a strong thought process for replacing thermal energy with renewable energy.

To ensure that such investments are made fairly, we need efficient engineering to plan them out. As consultants, we want to provide legal, engineering, and connectivity clearances that will not only assist in providing a good asset in your company, but also in building it at the lowest possible cost. Our goal is to make it easier to finalize land for private ownership or lease, to facilitate government-private land allotments, and to assist in obtaining connectivity approvals. We want to play a significant role in serving as a derisking catalyst for all types of renewable energy investors.