The Colossal Solar is Tuning Growth – New Numbers are Promising

The solar wealthy countries are on a row to compete on this nascent solar market. Last year, the big heads of the world congregated to sign a historic pact under International Solar Alliance (ISA), marking the generation to the alternative energy, especially ‘solar’.   The solar industry of U.S. is witnessing impetus growth as new reports asserts that last year U.S. commissioned more solar power than natural-gas capacity. The U.S. solar market grew by 17 percent in 2015, according to new figures released by the Solar Energy Industries Association (SEIA), and it’s expected to grow even more. The growth is a record-breaker, amounting to 7,286 megawatts of solar photovotaics installed.

SEIA also disseminated a state-by-state breakdown of solar installations in 2015. California remains, unsurprisingly, in first place, followed by North Carolina and Nevada. But other states, like Utah and Georgia, saw huge strides last year and are quickly climbing the list. And individual homeowners are starting to hop aboard the solar train by the droves: the residential solar market grew 66 percent, and now represents its largest share of the overall market since 2009. 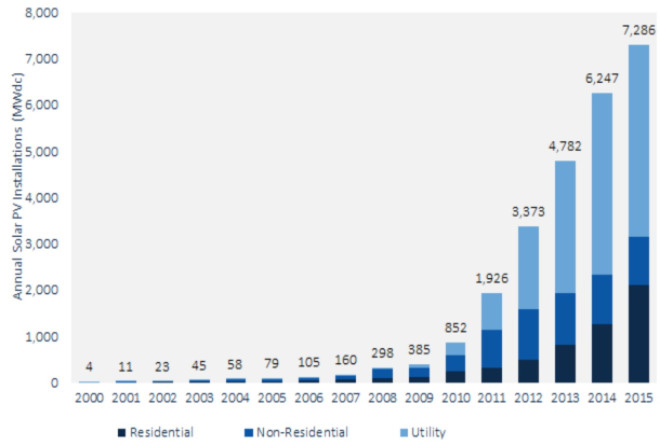 The barriers to entry for solar are quickly crumbling, with the price of installing new panels plummeting in recent years. Giant companies like Apple are boarding the solar bandwagon, signing enormous contracts to snatch up incredible amounts of solar power for their facilities.

Reports add that the take-off in solar sector is because of largely due to the federal solar Investment Tax Credit, a measure meant to incentivize both residential and commercial solar installations. Late in 2015, Congress voted to extend a 30 percent tax credit through 2019—a move that came as a godsend for the solar industry. Solar is poised to keep on soaring, as more people realize that clean air and the general stability of the planet are things that we need today.